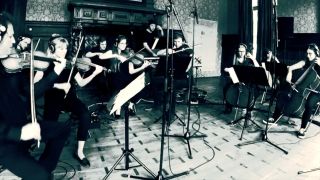 A string orchestra have released a video of their cover of Tool’s Stinkfist.

The Vigilante orchestra are based in Ghent, Belgium, and formed to “build a bridge between classical music and the heavier rock and metal genres.”

Vigilante will dedicate an entire evening to Tool covers on February 21 next year at Ghent’s Vooruit venue. Their cover of Stinkfist can be viewed below.

Vigilante say: “If you’re gonna start arranging progressive rock or metal songs, why not look for some of the best you can find. In our case we chose the music of Tool as a starting point.

“Arranging some of their best works so we could play it just felt very natural. In our current show, we even decided to stick to Tool and dedicate a whole concert to their very inspiring and exciting work.”

Tickets for A String Orchestra Plays The Music Of Tool are available at the orchestra’s website.

Vigilante add: “Our style is different than most string orchestras. We specifically pay attention to the playing techniques and grooves of the heavier rock genres to create a massive and impactful sound with a filmic touch.”

Last month a 40-piece orchestra covered Tool’s Schism. Other acts to have their music reinterpreted by classical musicians include Twenty One Pilots, Led Zeppelin and Guns N’ Roses, and Iron Maiden.