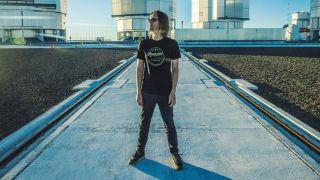 Steven Wilson has released a video for his track Permanating.

The song has been taken from his upcoming album titled To The Bone, which will arrive on August 18 via Caroline International.

Wilson previously released a stream of the track, but the video features a troupe of Bollywood dancers – and he says they work perfectly with the upbeat nature of the song.

Wilson reports: “I’m very proud of the video for Permanating. As soon as I wrote this song I had it in mind that Bollywood dancing would be the perfect accompaniment – such a joyous form of dance for what is probably the most joyous pop song I have ever come up with.

“I hope it will put a smile on your face as it does for me.”

Wilson previously revealed that his fifth solo album was inspired by 80s pop records and told Prog: “As I’ve gotten older, my listening diet has changed and I’ve gotten immersed in certain artists again after seeing them on things like old Top Of The Pops shows.

“In the last couple of years I’ve found myself listening to the progressive pop albums of the 80s: Kate Bush’s Hounds Of Love, Peter Gabriel’s So, Tears For Fears’ Songs From The Big Chair and The Seeds Of Love, and Talk Talk’s Spirit Of Eden.

“People think the 80s were a shallow, superficial era, but those records were really smart.”

Wilson will head out on tour in support of To The Bone from early 2018. See a full list of dates below.

Steven Wilson To The Bone tracklist

Steven Wilson: "I have a strong personality and I don’t need to hide it anymore"