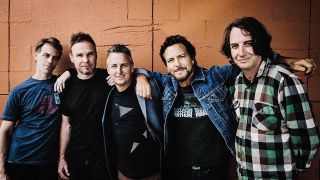 Pearl Jam have announced the release of their 11th studio album. Gigaton will launch on Monkeywrench Records/Republic Records on March 27, and is the follow-up to 2013's Lightning Bolt.

Guitarist Mike McCready says: "Making this record was a long journey. It was emotionally dark and confusing at times, but also an exciting and experimental road map to musical redemption. Collaborating with my bandmates on Gigaton ultimately gave me greater love, awareness and knowledge of the need for human connection in these times."

In May 2018 bassist Jeff Ament revealed the band were working on ideas for a new album, telling radio station WNCR, "We've been telling ourselves that we weren't going to put a ton of pressure on the situation. We really want to make something great, and we want to have the freedom to live with some of these ideas for a while and then maybe record them in a different way.”

Gigaton’s cover artwork features a photo of the Nordaustlandet ice cap on the Norwegian archipelago of Svalbard, located 600 miles from the North Pole. The photo was taken by National Geographic photographer Paul Nicklen.

The album is available to pre-order now, alongside a 7-inch single, Dance Of The Clairvoyants, which will be released in the coming weeks.

Pearl Jam have already announced a European tour for the summer, including a headline spot at the prestigious Hyde Park BST event in London in July, and today confirmed a series of US dates for the spring. Full schedule below.

Last week the band hinted that something was coming in a series of cryptic social media posts, then launched an interactive poster campaign in 11 cities around the world.