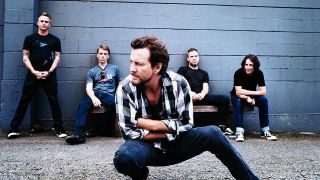 Pearl Jam have been announced as a headliner for next year's British Summer Time shows in London's Hyde Park. They'll play outdoor show on Friday July 10, with support from The Pixies and White Reaper. More acts will be announced.

The show will be Pearl Jam's only UK show of 2020, with ticket pre-sales kicking off on December 2.

The BST show will be Pearl Jam's first UK date since they finished their 2018 tour at the O2 in London, a date rescheduled after Eddie Vedder lost his voice.

We wrote, "Being called "sell-outs" has been a criticism that's unfairly dogged Pearl Jam since their beginnings. Being successful from a then small, alternative scene in the Pacific Northwest does not a sell-out make. It was bullshit thirty years ago, and it’s bullshit now.

" Looking out over their audience you get a sense that they don't see a bunch of fans to fleece, they see a load of people they want to move."