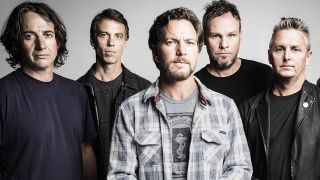 Pearl Jam’s Jeff Ament says the band have been “exploring” new ideas in relation to their next studio album.

They released the single Can’t Deny Me in March this year, with the bassist now revealing that they’re in the early stages of working on other tracks for what will be the follow-up to 2013’s Lightning Bolt.

Ament tells 106.1 The Corner (via Blabbermouth): “We have a bunch of stuff that's sort of partly written. Unfortunately, we have rehearsals coming up for Europe and the shows this summer, so it's in a little bit of a limbo state right now.

“We still need to record it – we haven't really recorded anything but there are a lot of ideas.

“We've been telling ourselves that we weren't going to put a ton of pressure on the situation. We really want to make something great, and we want to have the freedom to live with some of these ideas for a while and then maybe record them in a different way.”

He adds: “We're sort of exploring all sorts of different things right now. So I think it bodes well for whatever the next album is.”

Last month, Ament launched a video for his solo track Safe In The Car, which features on his new album Heaven/Hell.

Pearl Jam have several live dates scheduled over the summer.

Pearl Jam Home and Away US tour dates