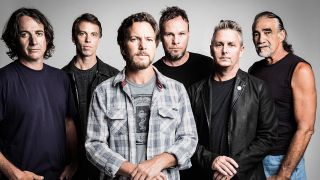 Seattle alt-rock stalwarts Pearl Jam have uploaded an image of an electrocardiogram on their social media accounts, suggesting the band are active with an announcement imminent. The graphic has the words 'Pearl Jam' spelled out in the middle.

Concrete details about what they're teasing are thin on the ground, but the image has regardless prompted feverish speculation from the band's fanbase. Is a new album about to drop? Are they going to announce a huge 2020 world tour?

Only time will tell – but it's worth noting that both theories have pretty solid foundations. Back in January 2019, we reported that Pearl Jam were "in the middle of" a writing a new album. Speaking to Rolling Stone, guitarist Stone Gossard confirmed "We’re going to make a record, and we’re in the middle of it. We’re just going to keep plugging away until we get one done."

Bassist Jeff Ament added: "We’ve gone in, probably, four or five times in the last couple of years, so we have a whole ton of unfinished stuff. We’re just in a little bit of limbo. I’m sure everybody’s got a bunch more riffs, and I’m sure vocalist Eddie Vedder’s got a handful of journal lyrics.

"It’s just going to take us all getting into a room together for six weeks and just knocking something out."

Given they've now had a full year to get into that room and knock something out, the idea a new album is on the horizon has some significant merit.

As for the tour, Pearl Jam have already announced a European tour for the summer, including a headline spot at the prestigious Hyde Park BST event in London in July. Extending that tour to other regions doesn't seem like too much of a leap. Of course, a big tour usually means one thing: a band have a new album to promote.

All will become clear soon. In the meantime, you can grab tickets to the Hyde Park show, or any one of their European dates on their official site.