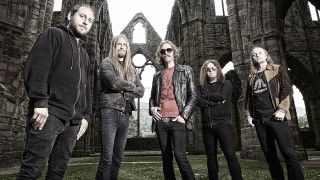 Opeth have announced that they’ll release a live package later this year.

Titled Garden Of The Titans: Live At Red Rocks Amphitheater, it will arrive on November 2 via Moderbolaget Records / Nuclear Blast and was captured during their show at the iconic venue in May last year.

The package will launch on CD/DVD, CD/Blu-ray and coloured vinyl, with the band marking the announcement with a live video for Sorceress – the title track from their 12th studio album which can be seen below.

The video footage was overseen by The Deka Brothers, while the audio was mixed by David Castillo. The striking cover art was created by Travis Smith.

Last month, Opeth guitarist Fredrik Akesson revealed that work on the Sorceress follow-up was underway and told Face Culture: “We’re very much into demoing. I’ve recorded a lot of solos so far and Mikael Akerfeldt has already written 12 songs for the new album, so we have more  than enough material for an album.

Garden Of The Titans: Live At Red Rocks Amphitheater is now available for pre-order. Find the cover art and tracklist below.

Opeth: Garden Of The Titans: Live at Red Rocks Amphitheater tracklist
1. Sorceress
2. Ghost Of Perdition
3. Demon Of The Fall
4. The Wilde Flowers
5. In My Time Of Need
6. The Devil's Orchard
7. Cusp Of Eternity
8. Heir Apparent
9. Era
10. Deliverance