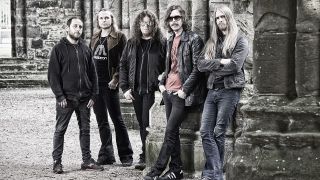 Opeth have written 12 tracks for inclusion on what will be the follow-up to 2016 album Sorceress.

Akesson tells Face Culture: “We’re very much into demoing. I’ve recorded a lot of solos so far and Mikael Akerfeldt has already written 12 songs for the new album, so we have more  than enough material for an album.

Akesson says they hope to release the record in the first quarter of 2019 and adds: “Compared to the last three albums, I would say this album is more complex, more energetic and I think it’s gonna be something.”

Speaking last year, vocalist and guitarist Akerfeldt said he wanted the follow-up to Sorceress to be “something twisted”.

He said: "Sorceress for me is old hat – it’s a lovely record, but it’s back ‘there.’ I’m not lingering on it because it’s old now.

“I’m not lingering on this record as being a beacon of hope for anything – it’s just what we did then, and I’m hoping next time we’re going to do something different, and I hope, something twisted. Nothing necessarily great, but twisted at least.”