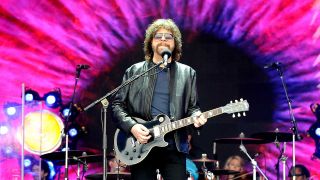 Jeff Lynne's ELO have announced a European tour for October of this year.

The band will play seven UK and Irish shows on the From Out Of Nowhere tour, kicking off with a pair of London performances before heading off to Birmingham, Manchester, Belfast, Dublin and Glasgow. The band have also confirmed a further seven shows in mainland Europe, starting in September.

"The audiences in the UK and Europe were so good," says Lynne. "We're looking forward to bringing a new show and some musical surprises this fall. I can’t wait!"

Full dates below. Tickets go on sale Friday January 31 at 9am.

From Out Of Nowhere was released in November. It's the second album from Jeff Lynne's ELO since the band reformed to play London's Hyde Park in the summer of 2014.

"I can't believe it's gone as well as it has", Lynne told Classic Rock last year. "I was worried about it. Would people still know who we were? We'd taken 30 years off! But we went down a storm, and it's been like that ever since."

Jeff Lynne's ELO: From Out Of Nowhere

The wistfulness, the super-saturated sound, the layered harmonies and instrumentation, the timeless echo of pasts and retro-futures colliding. The humanity, the performed frailty at the heart of manufactured perfection. Lynne still has it. He still knows how to create the magic. View Deal