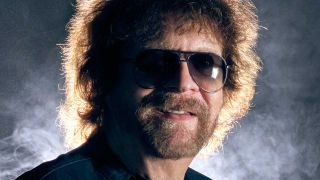 Back in 2014, ELO were asked to play their first big live show in quarter of a century, headlining a BBC festival in Hyde Park, London. And Jeff Lynne still can't believe his luck.

"I can't believe it's gone as well as it has", says Lynne, sitting in a suite in one of London's more salubrious hotels, eyes hidden behind trademark shades. "I was worried about it. Would people still know who we were? We'd taken 30 years off! But we went down a storm, and it's been like that ever since."

It has. A year later Jeff Lynne's ELO released the acclaimed Alone in the Universe album – since awarded Platinum status in The UK – and the band headlined Wembley Stadium in 2017.

Now there's another album, From Out Of Nowhere, another album of songs worthy of the ELO legacy. We asked Jeff to tell us about it.

From Out Of Nowhere

"This song came to me from out of nowhere, and that's why it's called that. It really did! I was just sitting at my guitar like I normally would, and this chord sequence came to me and I just went, 'Oh, that's good!'

"The title came to me because the chords came to me so quickly. I started singing the little melody and it gradually grew, and I extended bits and made them bigger,  and then I started recording it in my home studio.

"And that's how it happened! It really came to me quickly, and it was the first song of the album I did, so there's really a double meaning: the album has the same title, because the song and the album all came to me really quickly."

"I tried to make it a bit of a soul-type number. It's actually my one of my favourites, because I like the chords in it. There's a little bit of three part harmony in there, which I like.

"I like it very much, and I know you're not really supposed to say that about your own stuff. It's simple, and yet there are quite a lot of chords in it. There's some really nice chords in there."

"All My Love is is probably the oldest song on the album. It's about 20 years old. I dug the tape out of the cupboard, and I thought, 'I remember this! I should have done this one before!'

"I really like it now. It's got a rhythm that I wouldn't normally use. It's got more of a Latin beat to it, which changes the whole feel of the track."

"I've got a box of a few hundred tapes that I've not had a chance to listen to for years and years – probably for 20 years or so – but I'm planning to actually listen to them, and see what the hell's on there. There might be some great songs that I've forgotten, and there might be some horrible ones on that I wish I'd forgotten!"

Down Came The Rain

"It reminds me of a children's nursery rhyme. I really like it because of the sounds of the two guitars. It sounds like a 12-string, but it's actually two six-strings, one playing  two octaves above the other. I like its simplicity."

"That isn't brand new – it's a few years old. I had an old version of it, and I did a new version, re-recording it with a much bigger sound than it had before. I like the little yodel in it."

"I wrote this before I went on the last tour. It meant, 'Go on then, let's do it one more time. Let's let's just do it again!' The words explain it a little bit: I'm trying to be a bit descriptive, and I've tried to be real positive as well.

"I usually have a couple of gloomy songs, but I don't do gloom on this album. I try and make things come out in a good light, so it's not sad. Because it's so easy to do sad songs, you know? 'My baby's gone' and all of that. You know, like them old blues records."

"Sci-Fi Woman is about a woman who's a bit of a nutter, who loves sci-fi. It's not based on anyone in real life that I know of, although there probably are people who think it's them!"

Goin’ Out On Me

"This is an old-fashioned shuffle, like a 50s kind of thing. I really like this one. I enjoy the rhythm, and I like the simple chords. The sound is good, and the piano is really nice.

"All the songs were done in my studio at home in LA. It's funny: it depends on the day, but sometimes you get just get a different sound – where you put your mics is obviously a lot of it – but I really like the sound of this one."

Time Of Our Life

"This was about playing at Wembley, and I've even nicked a little bit of the crowd. We had audience mics set up to record the applause – because we were making a film – and so I nicked a bit of the crowd's vocal from when we were singing Telephone Line. There's probably a few thousand of them all singing the falsetto part.

"It's very jolly, because I was in such a good mood having done that show. I was so nervous about the show, but it was great to do it and have it be a success. Everybody loved it.

"The nerves stop when you get on and do the first number and everyone goes mad. And the age groups are unbelievable! It's ten-year-olds, 20-year-olds, 60-year-olds... and all the kids know all the words."

"Songbird is actually a true story. These doves moved into an alcove above my window and had babies. They were all living in there, looking at us through the kitchen window.

"Often these songs have a sad ending, but I wanted to give it a good ending, and fortunately I could do it because they learnt to fly. Suddenly they could fly, like harriers, straight off the ground up into the air, up to the telephone wires.

"It was such a great moment, and in the end they all flew off together. So what I turned all this into was a song about them coming home. Because I believe that the babies come back to where they were born, to make their own nest. My songbird came home."