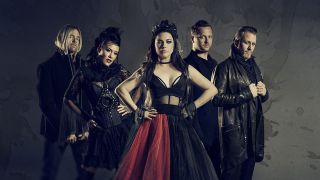 In November last year, Evanescence released their Synthesis album, which featured reworkings of some of their best-loved songs.

They toured extensively in support of the record, playing shows across North America, Australia, Russia, Europe and the UK with a full orchestra. Now the band have confirmed that they’ll celebrate the landmark tour with a live package.

Synthesis Live was filmed and recorded in front of a sold out crowd at the Grand Theater at Foxwoods Casino on November 3, 2017, and will be released on DVD, DVD/CD, Blu-ray and Blu-Ray/CD on October 12 via Eagle Vision.

A statement on the release reads: “Amy Lee’s incredible vocal range and the group’s expressive, multi-layered music naturally lends itself to orchestral accompaniment, shining a light on the singular beauty of the arrangements by composer David Campbell and conducted by Susie Seiter – creating a truly dynamic, cinematic sound.

“Lee has called this ‘a passion project’, which undoubtedly shines through. The sense of occasion is not lost on the band or audience alike in this unique and highly emotive show.”

Synthesis Live is now available for pre-order through PledgeMusic, while a trailer, the cover art and full tracklist can be found below.