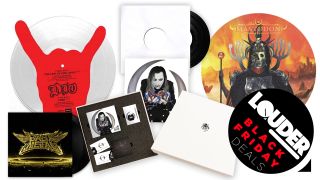 It's Christmas come early – or should we say, Cyber Monday come right on time – for vinyl lovers at the moment, as Townsend Music's Cyber Weekend deals offer up to 75% off vinyl and merch over on their site.

There's all sorts of waxy goodness in their Cyber Weekend offerings, including a bunch of rare platters (test presses, picture discs) and jazzy merchandise.

There's over 1500 products currently going cheap in their sale, so get ready to roll your sleeves up and get cracking on some serious digital crate digging. Here's just a few!

As always, we've picked out some of our favourites for you below. And don't forget, there are also savings galore on the best turntables, vinyl, instruments, and the best bluetooth speakers elsewhere on the site.

The Darkness - Easter Is Cancelled Test Pressing (Signed):  £60.00
That rare wax we mentioned? How about a signed Darkness test press, limited to just 50? Yeah, that's pretty good we reckon. And if you're not sure if the album is any cop, we gave it an 8/10 and called it "a winning tightrope between the sublime and ridiculous".View Deal

Nazareth: Love Hurts/My White Bicycle 7" Test Pressing , Now £15
Only 20 of these bad boys were produced when Nazareth rereleased their 1975 cover of the Everly Brothers classic last year. And one of them can literally be yours.
View Deal

Tom Morello Nazi Lives T-Shirt Now £5.00
Smashing Nazis has never been cheaper than it is on Cyber Monday.View Deal

Dan Reed On Your Side Necklace Now £17.50
This jewellery by Helene Wahlstrom is based on lyrics by Dan Reed. "I've seen the monsters eyes under my bed," sang Dan in the song of the same name. "I guess he's coming for my head." To be fair, he's probably coming for your necklace.View Deal

SOLD OUT Dio - The Last In Line Live Picture Disc: £18.19
How do you make a record even more metal? You make it a picture disc and stick Ronnie James Dio's devil horns on it, that's how. This die-cut picture disc is limited to 5000 and widely out of stock online.View Deal

Foreigner - Double Vision: Then And Now: £11.49
This limited edition double-LP Gatefold and Blu-ray offering contains heavyweight vinyl, more Foreigner hits than you can shake a stick at, and a chance to go behind the scenes as original band members join Mick Jones and Foreigner’s current lineup for the very first time in the band’s 40-year history, with both incarnations of the band sharing the same stage for the first time. Yikes! View Deal

The Fall - Medicine For The Masses - The Rough Trade Singles Boxset: £41.99
Bringing together the four classic 7" singles The Fall released on Rough Trade in the early 80s, this extremely attractive box set includes coloured vinyl re-mastered discs plus a set of four button badges, each featuring an element from the single sleeves. Nice.View Deal

Iggy Pop - Post Pop Depression: Live At The Royal Albert Hall Triple Heavyweight LP:  £50.40
A hefty triple-LP set of what Townsend confidently call the "best gig ever". Who are we to argue?View Deal

Mastodon - Emperor Of Sand Picture Disc: £24.49
Picture discs. They just look cool, don't they? Well, this one you can admire in all its glory all of the time, as it's a double sided picture disc in a clear vinyl sleeve.View Deal

Saxon - Thunderbolt (The Singles) Boxset: £39.19
Saxon released this singles box set to celebrate Record Store Day this year, but now your patience is rewarded and you can get it at a snip of the price. Includes five black 7" singles.View Deal

Babymetal - Metal Resistance Double LP: £10.00
We called Metal Resistance "a ludicrous but brilliantly executed delight" when we reviewed it in 2016, which should tell you all you need to know about this record – especially now it's going for half price.View Deal

Echo & The Bunnymen: The Stars, The Oceans & The Moon (Signed): was , now £15.00
This signed double album on heavyweight vinyl sees the Bunnymen reinventing some of their classic songs, with new arrangements, strings, and more. It doesn't always work but Mac's voice is still a thing of wonder and The Stars is an album all fans will want for their collection – especially signed and at this price.View Deal

Dan McCafferty - Last Testament double vinyl: was , now £9.49
For decades the voice of legendary Scottish rockers Nazareth, Dan McCafferty had to retire from that band's punishing tour schedule. But that doesn't mean he's going gently into that good night. This year's Last Testament album saw him with a mix of musical styles and flavours. At 50% off, it's a worthy addition to every Nazareth fan's collection.View Deal

Band of Skulls - Baby Darling Doll Face Honey 10 Year Anniversary boxset: was , now £80
Southampton’s Band Of Skulls, purveyors of chiselled blues epics and granite-guitar funk-outs, made quite an impact when they came out with Baby Darling Doll Face Honey in 2009. 10 years on, that debut album has been given the super deluxe treatment, with a 12"-sized padded casebound book with 60 pages, 12" milky-clear coloured vinyl, bonus 10" transparent red coloured vinyl of B-Sides and Bonus Tracks, plus 4CDs, including live shows, and a USB with nearly an hour of video content including promotional music videos, live videos, documentaries and making-of features. £20 off.
View Deal

Tiger Army - V splatter vinyl: was £15, now £3.99
The fifth album from the much loved US psychobillies on splatter vinyl at the ridiculous price of £3.99. Worth it for the artwork alone, V is an entertaining collection of goth'n'roll.View Deal