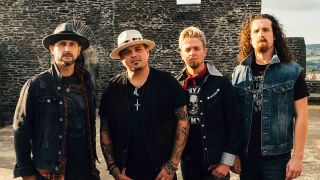 Black Stone Cherry have postponed their upcoming UK tour until 2021.

The run of shows was due to kick off on October 9 in Southampton and climax later that month in Nottingham. It also included a performance in London's iconic Royal Albert Hall.

"We’ve been closely monitoring the unprecedented global situation and it has become clear that it’s just not possible to go ahead with the shows as planned," say the band. "We have looked at many options, but ultimately the health of our fans, crew and family is paramount.

"The Black Stone Cherry Tour due to take place in October 2020 has been rescheduled to September 2021. We’re pleased to have been able to reschedule the tour in the same venues, so do hang on to your ticket – it will be valid for the new date.

"We cannot wait to come see you all with a new album under our belt and oh how much sweeter this tour will be! In the meantime, stay safe and look after each other."

The new dates are scheduled for September next year, and begin on September 9 at Bristol's O2 Academy, while the Royal Albert Hall date is now the final show of the trek, on September 29.

Last week the band teamed up with Monster Truck for a new charity single, Love Become Law, which is released under The Cherry Truck Band banner. Black Stone Cherry will be donating their proceeds to The Boys And Girls Club Of America, while Monster Truck will give the money to Black Lives Matter.