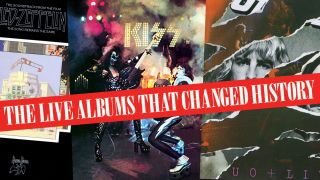 When we asked Slash what makes a great live album, his answer was simple: “They should be honest and sincere. They should be mixed well, but they shouldn’t be over-produced or toyed with too much. Feel and energy are essential to a live record – that’s what the listener needs to pick up on. It needs to translate that fucking energy.”All of that applies to these essential LPs released between 1973 and 1977 – the golden age of the live album. If Cream, The Who, the Rolling Stones and Deep Purple put the live album on the map, then Kiss, Led Zeppelin, Peter Frampton and more took it to the next level – as you’ll find out in Part 2 of our look back at the greatest live albums ever.

Ian Rankin (Rebus author): “I’d been a Hawkwind fan since Silver Machine came out in 1972, but they never played my hometown. To get a sense of what they’d be like live, I bought Space Ritual in a second-hand shop in Fife. I’d put it on, sit on my bed and spread out the packaging. It took me into this weird, spacey environment that was full of possibility. I had no idea what an orgone accumulator was but I wanted one. And there were no wacky substances required – I’ve always used music as the way to take my head somewhere.

“What bands tended to do was clean the sound up to make it as much like a studio album as possible. Space Ritual was different. It was an grungy live sound, with lots of opportunities for things to go wrong. It was the first that made me feel like I was there, a propulsive, hypnotic show with all these wonderful bleeps, blips and droning guitars that were almost transcendental.

“People are sniffy about Hawkwind but they stayed true to their principles and have remained a really interesting unit. Punk sensed that; punks weren’t as dismissive of Hawkwind as they had that same anarchist edge to them. With very little money they seemed to do a lot onstage.

“Even now it’s the only live album I go back to time and time again – I must have four or five copies in various formats. And still no-one really sounds like them.”

Joe Bonamassa: “The Irish Tour ’74 album. That was the thing that started me with Rory Gallagher. I was probably 13 or 14 at the time, and I was going through my father’s albums. Somebody gave me it on cassette tape. When I heard just the opening, Cradle Rock, when the band came in, it was like, ‘Wow!’ Hooked for life, you know?

“Back then my father worked in a factory – he always worked in a factory and had blue collar jobs – and he used to wear those flannel shirts. And there was the album cover, the US version, and Rory’s on there with this flannel shirt, overgrown hair and a Strat and he just looked like everybody in my town. All those Tony Joe White covers that he did – he was just the ultimate working man’s guitar player, singer, songwriter. It was just an insane mix of talent and work ethic. I never met him, but you got a real sense just from his music that he knew who he was and where he came from and it was uncompromising. That was it.

“This captured him better than the studio albums. The problem with this type of music in the studio is if you start polishing the rough edges you start polishing the magic out of it. Even as a player I don’t take the same chances in a studio as I would live. For some reason I’m more embarrassed to screw up in front of four people than I am to screw up in front of 3000.”

Let’s face it: the first three Kiss studio albums were clunky. The songwriting was there, of course, but the execution and production most certainly were not. So thank God – or Gene Simmons, as He is sometimes known – for the arrival of Alive!, which showcased Kiss in their element. Even today, the album sounds like World War III – and IV, and V, and VI – in your living room. It exudes authority and aggression, and is imbued with an all-consuming, all-American self-assurance.

When Alive! came out in autumn ’75, Kiss had yet to tour Britain. All we had was a crusty black and white photo of the Space Ace and his smokin’ guitar. But within 30 seconds of Deuce, you knew you were listening to the greatest live act in the world. Alive! elevated Kiss to the level of supreme beings. No wonder we used to have to drink a quart of Cold Gin every night, just to calm ourselves down… Geoff Barton

Gene Simmons (Kiss): “The label was about to go bankrupt cos they’d put all their money into a Johnny Carson album, so we decided to throw caution to the wind: ‘If it’s gonna be the end, we’ll go down in flames – or up in flames’. I don’t think we gave a shit. We just connected with what we knew best: ourselves.”

In mid-1975, ex-Herd/Humble pie guitarist Peter Frampton was a moderately successful solo artist. Within a year, Frampton Comes Alive! had smashed all known sales records, transforming him into one of rock music’s biggest stars.

Until that point, most live records were little more than thumbprints of an artist performing their most popular songs. The laidback …Comes Alive! went a stage further, as the band elongated their songs to capitalise upon their potential: Do You Feel Like We Do was stretched to twice its original length as Frampton serenaded the baying audience with his talk-box, an instrument also used to stunning effect on the enduring Show Me The Way.

The album took root in America’s Top 40 for almost two years. If subsequent name-checks in Malcolm In The Middle, Wayne’s World 2 and even Vic Reeves’ Big Night Out weren’t enough to Ronseal its influence upon popular culture, then the appearance of an animated Peter Frampton performing The Simpsons, performing Do You Feel Like We Do surely was. Dave Ling

Never in the field of human conflict has a performer and audience gone at it so hard. Metallic KO could never qualify as one of the all-time greatest live albums by virtuoso playing. It made it on the potential for mayhem that lurks in the core of most rock shows, pushing it to the extreme, and being energised by the raw hostility.

The Stooges maintain a relentless drone while Iggy free-associates from some deep psycho-core of abuse and challenge that owes as much to nasty pro-wrestling as it does to Chuck Berry. You can’t see the missiles, the firecrackers and the broken glass but you can hear them, and easily visualise Iggy, stripped and bleeding, facing down the Scorpions Motorcycle Club who want to rip his arms off.

Metallic KO is an epic live album because it reminds us that rock’n’roll is about so much more than music. Mick Farren

Roy Harper: “I got to see Led Zeppelin at very close quarters on that tour, travelling as part of this huge entourage. The level of their success then was unbelievable.

“What a powerful thing Led Zeppelin were, wonderfully powerful. And it had such a beautiful power, too. People say Led Zeppelin borrowed a lot from what had gone before. But what Jimmy and the others did was take the raw material to a completely different level. Jimmy Page was a genuine original in his own right, but those four individuals together had that amazing chemistry that turned those blues things into something massive that the world was obviously waiting to hear.

“It was an Anglicisation of something that was actually American, but they loaded it with British sentiment, poetry and culture, then re-exported it. Being so close to them at the time, it was difficult to be objective about it all – you know, I was going along on the bus. But Zeppelin in full flight was an incredibly intense experience.”

Kevin Shirley: “When I went into this room full of boxes of tapes at Sarm West in 2002 it was the beginning of what became How The West Was Won. Jimmy Page and I listened to all the tapes and made notes about which performances were good, which were salvageable. The Long Beach and LA Forum shows were very cool. But there was no footage of those shows, so they couldn’t be used on the DVD. That was when we decided to put the two shows on their own CD. It wasn’t in our thoughts to try and outdo The Song Remains The Same. This was entirely different, recordings taken straight off the board that had remained untouched until I had them in the studio.

“The reason those performances still stand up now is because Jimmy really was a genius. He could create tempests, summon storms. He really was the master of light and shade. And the musicians around him allowed him to flesh out that vision. Especially John Bonham, without whom Jimmy and Zeppelin would never have been able to do what he did.”

When Status Quo decided to record a live album in 1976, their next decision was a no-brainer. As Rick Parfitt says: “It was very simple. If you’re going to have an audience on an album have a Glaswegian audience.”

And so, in the autumn of 1976, Quo arrived in Glasgow with the Rolling Stones’ Mobile Studio in tow. For the recording of the bluntly titled Live! album, the band played three shows, on October 27, 28 and 29, at the famous old Apollo theatre. It was a venue they had played many times before, but Quo literally went out of their way to record there, squeezing in their three-night stand at the Apollo between European and Far East tours – because, as Francis Rossi explains, “In Glasgow, we got the most phenomenal response. The Jocks, bless them, were known for that.”

Facilities at the Apollo were by no means perfect. The acoustics were, in Parfitt’s frank estimation, “shit”. The stage was unusually high, inducing vertigo in Rossi. Quo also feared for the safety of fans in the balcony. “It was moving three feet up and down as all the people jumped in sync with the rhythm of the music,” said bassist Alan Lancaster.

That atmosphere was tangible on the finished album. According to Parfitt, there was no overdubbing on Quo Live! “Never mind about it being a bit frayed around the edges,” he says. “That’s how we liked it.”

Released in March 1977 as a double-vinyl set, Live! included most of the band’s classic tracks – Caroline, Big Fat Mama, Forty-Five Hundred Times, Rain – bookended by blistering cover versions of songs that had shaped the band’s sound, Junior’s Wailing and Roadhouse Blues. Absent was Down Down, but no matter: even without their biggest hit, Live! was a tour de force that captured all the raw power of a band at its peak. Paul Elliott