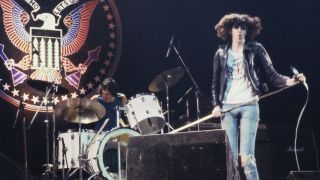 In this previously unpublished edition of our Stories Behind The Song series, Tommy Ramone and producer Craig Leon reveal how the Ramones classic Blitzkrieg Bop came to be. Tommy Ramone passed away at the weekend at the age of 65.

It sounds too surreal to contemplate, but there’s a fair chance the Ramones might never have existed without the Bay City Rollers. It was certainly true of their incendiary debut single, Blitzkrieg Bop. “There was a big hit by the Bay City Rollers at the time called Saturday Night, which was a chant-type song,” says ex-drummer Tommy Ramone. “So I thought it would be fun to do for the Ramones too. And somehow I came up with ‘Hey! Ho! Let’s go!’ I just liked the term because it made fun of Mick Jagger singing the Stones’ version of Walking The Dog, where he goes ‘High low, tippy toe’. We all used to goof on that and sing ‘hey ho!’ instead.”

Released in May 1976, Blitzkrieg Bop was just over two minutes of pure adrenalin, a three-chord ruck that hurtled by with furious abandon. It was the song that helped launch the Ramones as the roaring embodiment of New York punk. Less than two months later The Clash, the Sex Pistols and The Damned were all in attendance at the band’s historic first UK gig at the Roundhouse, which the NME claimed they “reduced to the hottest, sleaziest garage ever”. Blitzkrieg Bop was likened to a rallying call by Buzzcocks chief Pete Shelley. “We were so unique,” says Tommy. “It’s hard to imagine now, but what we were doing was so different from anything anybody had heard before. It was like we were from another world.”

Such youthful adulation was entirely fitting given the subject matter of Blitzkrieg Bop. Tommy Ramone wrote the song as his own celebration of rock fandom. “It was basically about a few kids going to a concert,” he explains, “getting away from it all and having a great time. I happened to pick up Joey Ramone’s guitar, a two-string guitar with A and E strings tuned to a fifth. And I started bashing away on it and came up with the chords.”

The heady thrill of it all is captured in the first verse. “They’re forming in a straight line / They’re going through a tight wind / The kids are losing their minds / The Blitzkrieg Bop,” spurts Joey in his best bubblegum-punk. So was it based on one particular cherished memory? “I saw lots of great live shows,” offers Tommy. “One of the best was a Murray the K revue show at the Brooklyn Fox Theatre, featuring Joey Dee and the Starliters. They did a long, gospel-tinged version of Shout that had everybody going out of their minds. I was 13 at the time. Another great show was The Who at the Village Theatre, before it became the Fillmore East. They were amazing.”

Blitzkrieg Bop may have been about the simple pleasures of going to a rock concert, but the Teutonic reference in the title led some to suggest it was a kind of oblique commentary on Germanic warfare and the Jewish heritage within the Ramones. Internet forums are stuffed with similar conspiracy theories even today. “That’s all nonsense,” refutes Tommy. “The original title of the song was Animal Hop. [Bassist] Dee Dee came up with Blitzkrieg Bop because he wanted to Ramones-ize it. And he changed one line. It used to be ‘They’re shouting in the back now’ and he rewrote it to ‘Let’s go shoot ‘em in the back now’. This might have led to the conspiracy ideas, but they’re not the original lyrics of the song. Dee Dee came up with the title and that line, but the rest of it is mine.”

In charge of bottling the band’s lightning in the studio was Craig Leon, A&R man and in-house producer at Sire Records. The Ramones’ self-titled debut LP, of which Blitzkrieg Bop was the opening volley, was recorded in the dead of night because the rates were cheaper. “I know exactly how much that album cost to make,” laughs Leon, “because I was the A&R guy and had the cheapest boss in the world [Sire head Seymour Stein]. It was $6,400. There were quite a few rehearsals, but everything was pretty much structured already. Tommy had a vision for everything about the band. He had the concept and I did the next step of putting it onto record and making it a little more unconventional and jarring than he might have originally intended. The Ramones were total chaos live, but their studio sound was still not quite there. Certain songs were given priority because they were the major tracks, Blitzkrieg Bop being one of them. So it got more production technique. The common myth that the band just went in there and did it isn’t true. It was very much a case of multi-layered guitar tracks, overdubbing and quite a bit of vocal technology. And we decided to exaggerate that old three-track English sound, which Joey loved. That added to the sense of chaos, that disturbing psychological weirdness. There’s a lot more to it than you might think.”

The sheer speed and physicality of the Ramones’ sound landed the record label with an unforeseen problem: how to get played on the radio. “The songs were played a hair slower than the way we played them live,” explains Tommy. “Believe it or not, playing fast was something that nobody had done before. So we were worried about radio play. The record company were concerned about us being too fast for the public.” Adds Leon: “I remember us discussing the idea of releasing Blitzkrieg Bop as a single. Seymour was worried about the Nazi connotations that the word ‘blitzkrieg’ has, but otherwise it was very much the kind of Bay City Rollers thing. I thought Blitzkrieg Bop might get onto some demented AM radio station somewhere.”

The single may have stiffed in the charts, with its parent album suffering a similar fate both here and in the US, but the Ramones’ effect on a new generation of anarchistic punks can’t be denied. Never mind the buried - and distinctly unhip - reference points. “They felt they were going to beat The Bay City Rollers, that’s the thing,” says Leon. “They went into it thinking they were going to be the biggest band in the world. Joey was the real fanatic for pop culture – I mean, he loved anything by Herman’s Hermits! I’m pretty sure that none of the Ramones were fans of the bands that people thought were their influences. They didn’t listen to the Stooges or the Velvets. They thought they were just dour old farts.”