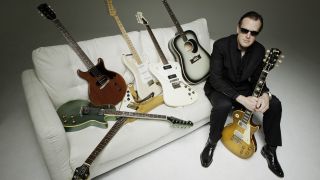 You either get Joe Bonamassa or you don’t. To his disciples, he simply outplays and outclasses anyone else on the contemporary blues rock scene, a DNA splice of top-of-their-game Clapton, Gary Moore, Rory Gallagher and Paul Kossoff who still manages to sound like his own creation.

To his detractors, he’s an overexposed hack who really isn’t a blues man at all. Well, BB King reckoned Joe Bo was blues, and he gets the last word. Here are ten of his greatest guitar moments to convert the misguided.

There’s a stripped down Chicago blues club vibe to this one. Shredding his lungs on one of his best early vocals, Bonamassa references Stevie Ray Vaughan and Albert King in his guitar solo, while adding flavour with variations in reverb, delay and shuddering overdrive.

A frankly stunning instrumental that allows Joe to indulge his inner Jeff Beck and, even more noticeably, Eric Johnson. With echoes of Johnson’s iconic Cliffs Of Dover, the track reveals a guitarist in total control of his instrument.

Sloe Gin, his sixth studio record, marks the point when Joe crossed over from great guitarist to one who could write songs to match his virtuosity. The title track is a six-string tour de force and an all-time fan favourite.

So Many Roads (Live From Nowhere In Particular - 2008)

If you had to pull out one track to showcase Joe’s unique guitar style - slow bends with sudden bursts of speed, ludicrously perfect intonation, sweet controlled feedback - then this is your baby. There isn’t one soul in that audience that didn’t get their shoes blown off…

This gem from Bonamassa’s ‘world record’ finds our hero weaving guitar lines alongside traditional Greek musicians. He manages to tear through a series of screaming bends, beyond the twelfth fret, without compromising the emotion at the song’s heart.

They’ll probably never write each other another Christmas card, but for a short time Bonamassa and Deep Purple alumni Glenn Hughes were a match made in hard rock heaven. Joe’s guitar intro and solo are melodic masterpieces.

It kicks off all Delta acoustic before a Les Paul-detonated riff appears, the kind you could use to blast through concrete. The solo finds JB at his most adventurous with some stunning vibrato, dual guitar runs and Middle Eastern sounding licks.

This righteous blast through one of the late and much-missed Irish legend Rory Gallagher’s finest moments has Joe Bo tearing off a great slide solo. It’s not so much a tribute as a love letter to a guitarist that changed his life.

The title track is the masterpiece, but it ain’t got no guitar solo to speak of. The thumping Chicago blues of I Got All You Need makes up for that with a deceptively traditional solo peppered with JB’s unique melodic stabs.

You can tell by the chord progression, outstanding guitar fills and brooding vocal, that something special is coming. When it finally arrives, the solo feels like an emotional release. This is one of the many reasons why his devoted followers think Joe Bonamassa’s the best.