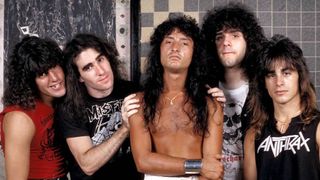 The career of thrash pioneers Anthrax is one of turmoil but ultimately triumph for the New York band. You may know about their love of comic book characters, a revolving door of members and how they spearheaded the rap metal revolution, but as this list attests, there’s plenty more to their 35-year existence.

A is for… Anthrax

This one isn’t as obvious as it seems okay? After the 9⁄11 terrorist attacks America was again rocked as parcels of anthrax bacteria were sent to news agencies and senators’ offices, killing five people. The band’s website was inundated with people looking for more information on the disease, forcing them to briefly change their website address from anthrax.com. Luckily they were only joking when they claimed they’d changed their name to Basketful Of Puppies.

B is for… Big Four

Such was the strength of their 80s output that Anthrax rightfully secured their place among thrash metal’s Big Four alongside Metallica, Megadeth and Slayer. After previously touring with Metallica in the 80s and the latter two on the legendary Clash Of The Titans tour, all four joined forces for the Big Four shows across the globe in 2010 and 2011.

C is for… Charlie Benante

He’s Anthrax’s chief songwriter alongside Scott Ian and one of the most influential drummers in metal due to his blistering double bass drum work. The last few years have seen Charlie Benante absent from his drumming stool, so it’s great to now see him back onstage with the band since the release of latest album For All Kings.

D is for… Dimebag Darrel

Close friend and ‘sixth member’ of the band, the late Pantera guitarist contributed solos to a number of tracks on Stomp 442, Volume 8: The Threat Is Real and We’ve Come For You All as well as getting the band absolutely hammered while on tour together. Performances of Worship Music highlight In The End fittingly see the band pay tribute to their fallen brother alongside metal icon Ronnie James Dio.

Their 11 full-length albums form a formidable thrash discography that can go toe-to-toe with the best of them, but the band’s diverse EP output is also essential for collectors. Whether it’s their first forays into rap on I’m The Man, singing in French on Penikufesin or the vast array of covers that spans everyone from the Sex Pistols to Celtic Frost, there are plenty of gems to be unearthed.

F is for… Fistful Of Metal

With the album cover featuring a poor bloke being pummelled by a fist wrapped in chain mail, the full-throttle assault of Deathrider and Neil Turbin’s high-pitched wails, no one was under any illusions of what Anthrax were about on their debut. Though it hasn’t dated as well as the rest of their back catalogue, it’s a shame more of these songs don’t get a look in during their live shows.

G is for… Guitarist

Founder, songwriter, lyrist, poker player, spoken wordsmith, snowboard and Yankee fanatic, and bearded lord of the riff, rhythm guitarist Scott Ian is the colourful face of the band and unofficial spokesperson for the metal world at large. It wouldn’t be an Anthrax show without his trademark stage moves, giving as much in his 50s as he did 30 years ago.

H is for… Helen Mirren

The dame’s 2003 comedy Calendar Girls, in which members of the Women’s Institute get starkers for charity, bizarrely features Scott, bassist Frank Bello and former singer John Bush joining the ladies for a poolside drink in LA. They also appeared in a 1992 episode of US sitcom Married… With Children, playing in the Bundy family’s living room.

I is for… Indians

The plight of North America’s indigenous people is explored on this standout track from 1987’s Among The Living. Though an extremely serious issue, live performances of the song are notable for the call to mosh of ‘Wardance’ and Joey running around with a feathered headdress.

Aside from a revolving door of early singers and the brief addition of Dan Nelson at the end of the 00s, Joey Belladonna and John Bush have been up-front on and off for the past three decades. Though Armoured Saint’s Bush more than held his own, Joey’s wail and unhinged stage presence are synonymous with the New Yorkers at their peak.

K is for… Kinison, Sam

The band were such fans of the late American stand-up that they used samples of his famous scream to bookend I’m The Man. Scott Ian recalls asking Kinison for a picture, saying: “He told me to wait while he drove some girl to his house to fuck her and that he’d be back to take a picture with me after that.”

L is for… Living Dead, The

Seemingly above all else, guitarist Scott Ian really loves zombies. He’s happy to talk at length about one of his favourite TV shows, The Walking Dead, on which he’s appeared as a ‘walker’, while they also form the basis of Anthrax songs What Doesn’t Die and Fight ‘Em Til You Can’t.

M is for… Metallica

Tour mates and peers yes, but ultimately the story of the two bands is one of friendship stretching back to when Scott Ian presented a bunch of Bay Area alcoholics with a toaster oven when they were recording Kill ‘Em All in New York. The guitarist nearly played with Metallica when James Hetfield broke his arm skateboarding in 1986, and his autobiography spills the beans that Lars Ulrich was close to getting fired from the band that same year.

The likes of Eddie, Snaggletooth and Vic Rattlehead are more recognisable, but the snap cap and inane grin-wearing mascot has played a prominent role in the band’s career. From adorning merchandise and running around like a loon in the Antisocial video, Not-Man is an underrated but essential part of the Anthrax legacy.

O is for… Other bands

The crossover side project formed by Scott, Charlie, ex-bassist Dan Lilker and Billy Milano, Stormtroopers Of Death released one of the genre’s undisputed classics with Speak English Or Die in 1985. It’s still a fucking riot 30 years later, providing you take the deliberately puerile lyrics with a pinch of salt. Ian also played guitar in the awesome The Damned Things and formed Motor Sister with wife Pearl.

P is for… Pits

Taking influences from the New York hardcore scene and with one of their most recognisable songs being Caught In A Mosh, it’s no surprise Anthrax shows are famous for their boisterous crowd shenanigans. The song itself was inspired by guitar tech Artie Ring falling into the pit while tangling with a stage invader during a 1986 show in Denver.

Q is for… Queens

The birthplace of Anthrax, formed in the New York borough by schoolmates Scott Ian and Dan Lilker in 1981. While the rest of American thrash’s big guns hailed from the San Francisco Bay and LA scenes, Anthrax were at the forefront of New York-centred East Coast thrash that included Overkill and Nuclear Assault.

It all started with Scott Ian wearing Public Enemy and Run DMC shirts and the juvenile I’m The Man, and culminated in the revolutionary rap metal classic Bring The Noise. Though Walk This Way may be year dot for the fusion hip-hop and rock riffs, this intense collision of styles was to have an immeasurable impact on both genres.

S is for… Spreading The Disease

Coming just a year after their debut, the first album to feature Belladonna, Bello and guitarist Dan Spitz cemented the classic Anthrax sound and line-up. It has began an iron-clad run of albums that continued throughout the 80s with Persistence Of Time, State Of Euphoria and Among The Living.

After its 80s heyday, the ensuing decade was less kind to many of metal’s biggest hitters. Though they kicked things off with the awesome Persistence Of Time and Bring The Noise single, the band’s experimentation on Sound Of White Noise onwards resulted in a more alternative style that produced some notable tracks but a wane in standards as the decade progressed.

U is for… Uncle Charlie

We’re used to seeing bands containing siblings, but not many can boast an uncle and nephew in their ranks. Though only separated by a few years, bassist Frank Bello is the son of drummer Charlie Benante’s sister. The energetic bassist briefly left the band to join New York riff machines Helmet in 2004 and was replaced by John Bush’s fellow Armoured Saint member Joey Vera.

V is for… Videos

Anthrax have a vast video catalogue with nearly 30 visual treatments documenting their entire career, from their early years playing in a lunatic asylum (Madhouse) to gruesome NSFW horror (Blood Eagle Wings). They even enlisted fan Keanu Reeves to run down the road on We’ve Come For You All’s epic Safe Home.

W is for… Worship Music

It took eight years, four singers (if you include Slipknot’s Corey Taylor, who was due to join the band in 2007) and a misguided cover of Refused’s New Noise as a hidden track, so you’d be forgiven for thinking the band’s 10th album was the thrash equivalent of Chinese Democracy. Thankfully their comeback was both a commercial and critical success, bulging with huge tunes, killer riffs and the returning Belladonna doing what he does best.

As well as being a fan of zombies, Doctor Who, Battlestar Galactica and Game Of Thrones – he once became a White Walker – Scott Ian has always been a huge comic book fan, particularly Judge Dredd and Marvel silver age comics including X-Men, The Incredible Hulk and Spider-Man. Sadly he lost his childhood collection during divorce from his first wife.

Y is for… Young brothers

Such is his love for AC/DC’s Angus and Malcolm that Scott Ian bestowed the middle name Young on his son Revel. He even has portraits of the pair from the Highway To Hell cover tattooed onto his biceps, drawn by Kat Von D on her show LA Ink.

Z is for… The Zazulas

Jonny Z and Marsha, the husband and wife duo who founded Megaforce Records, signed Anthrax after Scott handed Jonny their demo outside an Anvil gig in 1982. It’s proved to be a fortuitous relationship, with the label releasing all but four of the band’s albums.