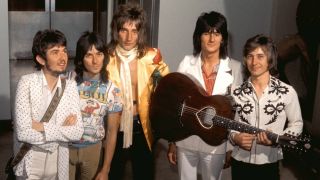 Rod Stewart & The Faces in 1971: these are their Top 10 best songs (Image credit: Ron Howard\/Redferns)

Rising from the ashes of 60s mod-rockers The Small Faces, the Faces were the ultimate good time band. Building on the foundations laid down by their former incarnation, it was the addition of former Jeff Beck Group guitarist Ron Wood and swaggering, lad-about-town singer Rod Stewart to the core trio of bassist Ronnie Lane, keyboard player Ian McLagan and drummer Kenney Jones that helped bring success on both sides of the pond, lending swagger and verve to their soulful rock’n’roll. Raise a glass to their 10 greatest songs…

The Faces were always up for a good cover, and when Ian McClagan and Ronnie Lane heard this Paul McCartney solo gem on a car radio in Connecticut it was in their set list for the next gig. This live version from the Long Player album is ample proof of what a wise decision that was.

The opening track from A Nod Is As Good As A Wink…, this set the tone for the whole album. With a breathless Stewart vocal and full on rhythmic intent, it projects all the slovenly power and vitality of their stage act, aided by Glyn John’s precise studio production.

An early signature piece full of familiar Faces swagger in which the momentum never lets up. Rod meanwhile hams up the party story, explaining that ‘I was glad to come but I was glad to get home’. Towards the close, Rolling Stones sideman Bobby Keys is a late gate crasher complete with sax.

For all their bawdiness, The Faces often bought a deft sensitivity to proceedings. This bittersweet nostalgic tale of returning to the homestead where love did indeed live (‘They can tear it all down and build something new but only I remember what was here’), finds Rod offering more than a little tenderness over Ronnie’s suitably melancholy Leslie guitar effects.

Led by Woody’s slithering guitar work, this glorious one off single from late 1973 storms though a subject matter that took them into the murky surrounds of the pool halls. Rod chuckles his way through the lyrics, proclaiming at the close: ‘You’re breaking’ my heart but you’re stealin’ my tart oh no’. Never a dull moment here.

Thanks to his solo success, it may often have been Rod’s name in lights but The Faces were always a democratic affair. On Debris, Ronnie Lane takes centre stage and he sings with much compassion on this lament about his father. Mellow and reflective in a manner befitting the much missed bassist’s quiet humility.

Built around a pleasingly simple mid tempo keyboard shuffle, this delightful outing provided them with their biggest hit, reaching No.2 in the spring of 1973. Rod provides all the right vocal nuances on a wonderfully understated performance.

Ronnie Lane’s wistful closer to the Ooh La La album was in the wrong key for Rod and after the bassist himself had a shot at the vocal himself, it was thrust onto Ron Wood. He brings a surely gruffness to the rueful theme of the song that works beautifully. In 1998, Rod recorded his own version with help from members of The Corrs.

Their final single – an infectious soulful workout aided by an uplifting string arrangement. The repeated ‘Keep on loving you baby’ refrain at the close tips its hat to Bobby Womack’s You’re Messin’ Up A Good Thing. Behind it all, Kenney Jones’ offbeat tom tom work provides the groove.

From Woody’s incessant guitar intro though to Kenny’s final drum kick, this is a prime slice of Faces sleaze’n’roll. Lyrically there’s no hiding the song’s blatant intentions, which only adds to the fun, while the deft changes in tempo are masterfully handled before Mac leads them into the home straight with some neat keyboard runs. All nailed by the second take.