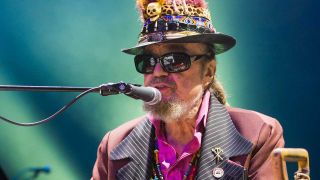 In the blues mainstream, guitars run the game, but New Orleans is a piano town, with a heaped helping of horns on the side. The Mississippi Delta was the birthplace of the blues, but New Orleans was the cradle of both jazz and funk, and – in terms of its music, cuisine, language and all manner of cultural traditions – it’s pretty much a law unto itself.

Mac Rebennack was a musician/hustler – the top joint of his left-hand third finger was once shot off; thankfully it was surgically reattached, albeit wonkily – who became a fixture on the local studio scene, playing piano or guitar.

In 1968, producer Harold Battiste created his second great scam (the first being to somehow convince the world that the shorter, uglier half of Sonny & Cher was a genius) when he helped transform Rebennack into a reincarnation of 19th-century voodoo priest Dr John Creaux on a ‘voodoo-rock’ album called Gris-Gris.

In the years since, both ‘Mac’ and ‘Doc’ created stacks of superb albums (including not a few ‘collaborations’ in which the two sensibilities fused, notably Goin’ Back To New Orleans), alternating with session stints for, among others, BB King, Marianne Faithfull, Ringo Starr, Johnny Winter and Stephen Dale Petit. Desitively bonnaroo or what?

Doc's last album was 2014's Ske-Dat-De-Dat: The Spirit of Satch, a tribute to jazz great Louis Armstrong, where he was joined by the likes of Bonnie Raitt and The Blind Boys Of Alabama.

Yeah, we know it’s a disgrace that, as yet, there’s no full-on, career-spanning Dr John best-of album available. Mos’ Scocious rounds up his first few years on Atlantic and Best Of The Parlophone Years covers his most recent period, but right now, let’s stick to albums as albums.

Starting with… In 1971, Mac Rebennack came out from behind Dr John’s mask to cut an album which, he said, should’ve been called ‘More Gumbo, Less Gris-Gris’. Sidelining the voodoo schtick and retaining nothing but the Dr John byline, Dr John’s Gumbo was the first ‘roots move’ album of a decade that was full of them (think John Lennon’s Rock’N’Roll, David Bowie’s Pin-Ups, Bryan Ferry’s These Foolish Things, and so on).

Rebennack had deeper roots than any of them, and he concocted a full-blown tribute to the wonders and glories of the classic New Orleans R&B of the 1950s.Co-produced by Jerry Wexler and backed by the cream of local sessioneers, Rebennack dished up a smokin’ casserole of Professor Longhair, Earl King, Huey ‘Piano’ Smith and many more, showcasing his rollicking piano and wheedling whine/ croak of a voice to maximum effect.

Throughout the album, beats be funky, horns be honkin’ and an anthemically stellar songbook – including the likes of Tipitina, Iko Iko, Big Chief (with a lovely, bubbling organ part played by Ronnie Barron), Junko Partner and Don’t You Just Know It (part of a Huey ‘Piano’ Smith medley) – is done to the proverbial turn.The big fun everyone sounds like they’re having is massively contagious, and good-time New Orleans R&B has rarely been more infectious.View Deal

‘They call me Doctor John, known as The Night Tripper…’ The one which kicked it all off: hokey and kitsch it may be, but its luridly ritualistic power remains undiminished by the passing of time. With his forked tongue sticking right through his painted cheek, Doc croaks his half-comic, half-sinister incantations over some lushly exotic backdrops that are simultaneously hallucinatory and funky.

Bookended by the epic title track and the monumental I Walk On Gilded Splinters, with a bunch of enchantingly tricky Mardi Gras dance grooves in between, this is both the ‘Doc’ album prototype (just as Gumbo is the ‘Mac’ album prototype), not to mention being one of the greatest stoner records of all time.View Deal

Y’all want the best seat in the house? Guess what – it’s right next to the piano. This 1981 programme of solo instrumentals (with one vocal interlude on Hoagy Carmichael’s The Nearness Of You and a little off-mic muttering on Silent Night) is about as good a showcase for Mac’s keyboard skillage as you can get, once again playing eloquent musical tribute to his home-town keyboard tradition.

He chased it the following year with The Brightest Smile In Town, another one-man show, and one that’s almost as cool as this album. On The Brightest Smile, he added vocals, flexing the tonsils on favourite standards both R&B and Tin Pan Alley, alongside the odd original.View Deal

The Best Of The Parlophone Years

The last studio decade or so was good to both Doc and Mac, and this compilation almost accomplishes what it says on the tin, even touching on Duke Elegant and Mercernary, Mac’s tributes to (respectively) Duke Elegant and Johnny Mercer, alongside revisitations of both Gumbo and Gris-Gris territory, with guest stars ranging from Paul Weller, Randy Newman and Supergrass to Mavis Staples, Cyril Neville and BB King.

Above all, it demonstrates the extent to which Doc/Mac remained on top of his game well into his seventh decade and beyond, and the ease with which he melds with radically different backdrops while always remaining himself.View Deal

The odd one out: this 24-minute mini-album/ EP/whatever was Doc/Mac’s rapid response to the horrific devastation wreaked by Hurricane Katrina in 2005. Its centerpiece is the four-movement Wade: Hurricane Suite, and it’s an awesome Crescent City concerto, fusing classical structure with elemental New Orleans-isms, followed by Mac’s own Sweet Home New Orleans, and all framed by Bobby Charles’s composition Clean Water.

Loosely based on the traditional Wade In The Water, the musical tidal wave which is Hurricane Suite is both unlike anything else in the Mac/ Doc catalogue and it’s utterly characteristic of both creator and setting.View Deal

Picking the flat-out best of Doc/Mac’s Parlophone albums is no easy task. It came down to a three-way standoff between a uniformly impressive trio: N’awlinz: Dis Dat Or D’Udda (the one packed with guest stars like BB, Mavis, Randy, Uncle Willie Nelson ’n’ all), the Gris-Gris-revisited epic Anutha Zone and this here.

Self-produced, self-written (much of it in collaboration with the late Doc Pomus) and performed mainly with Doc/ Mac’s own home-town band Lower 9-11 (plus cameos from slide guitarist Sonny Landreth and saxmeister David ‘Fathead’ Newman), this panoramic portrait of New Orleans is as personal a piece of work as he/they have ever done, and as powerful. And it’s fonkeh.View Deal