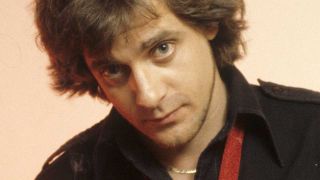 In September 2019, two of America’s most distinctive rock singers died within two days of each other.

Ric Ocasek, leader of The Cars, had been as hip as they come, a new-wave icon and innovator. Eddie Money, by contrast, had never really been fashionable at any point in his long career, even when he was racking up million-selling hits at his peak in the 70s and 80s.

He was one of the best of his generation, with a voice as soulful as it was gritty, but the songs he sang, mixing rock’n’roll, pop and R&B, were unpretentious and unashamedly mainstream. He was, as Rolling Stone stated with no little affection, “the patron saint of uncool”.

Born Edward Joseph Mahoney in Brooklyn, New York on March 21, 1949, he started singing in a number of local bands in his teens, and also briefly trained in the city’s police department, where his father and brother were officers. Then in the late 60s he relocated to San Francisco and shortened his surname to Money – ironic, he later said, given how little he had of it.

Eventually, after years of hard graft on the Bay Area club scene, legendary promoter Bill Graham led him to sign with Columbia Records. His self-titled debut album, released in 1977, remains his biggest seller: double-platinum in the US, with two hit singles – Baby Hold On and Two Tickets To Paradise – that have remained on radio playlists ever since.

More great records followed, platinum albums in 1979’s Life For The Taking and 1982’s No Control, the latter featuring another of his signature songs, Shakin’.

While his taste for the rock’n’roll lifestyle proved damaging (an accidental drug overdose left him with a permanent limp), he had his two biggest hits in the late 80s, with Take Me Home Tonight, featuring ex-Ronettes singer Ronnie Spector, and Walk On Water.

In the last 30 years of his life he toured on and off and made just four albums. Sober since 2003, he died aged 70 after heart valve surgery and treatment for cancer.

In the days that followed, his songs were performed on stage by friends and fans including REO Speedwagon and Bryan Adams. Dave Grohl, another famous fan, once had Baby Hold On as his cellphone ringtone. For Grohl and others like him – connoisseurs of classic American rock – Eddie Money, patron saint of uncool, was the real deal.

He was pushing 30 when his debut album came out. Not exactly a new kid on the block. And that was part of his appeal: a guy with lived-in looks and a voice to match, full of character, emotion and believability.

As Money recalled: “The first record was really from the heart, a personal and observational album.” He also stated frankly: “I always had bubblegum songs, because I wanted to sell records.”

This combination of emotional depth and pop savvy was perfected in the hits Two Tickets To Paradise and Baby Hold On. And as confirmed in a beautiful version of Smokey Robinson’s You’ve Really Got A Hold On Me, Money had soul.View Deal

His fourth album was aptly named for someone who, by his own admission, “went into a tail spin” in 1981, resulting in a near-fatal OD. But No Control, on which he worked with producer Tom Dowd, famed for his work with Rod Stewart, Lynyrd Skynyrd and many more, was a brilliant comeback and another million seller.

For much of this album – on the title track, the Top 20 hit Think I’m In Love, and Shakin’, a genuine all-American rock’n’roll classic – Money played it tough, but in a quieter moment there was great poignancy: Passing By The Graveyard (Song For John B.), a heartfelt eulogy for comedy genius John Belushi, had echoes of Money’s own wild lifeView Deal

But while some of the material was business as usual – the R&B pop of Maybe I’m A Fool, the self-explanatory Rock And Roll The Place – two songs had Money digging deeper: on the title track, heavy and bluesy, he dispensed hard-earned wisdom, and in Call On Me he sounded like a man on the edge. The latter, he said, was about “doing a lot of blow”.View Deal

Money went for a slicker, modern sound on Playing For Keeps, produced by Ron Nevison. Money was also trying out new ideas – for better and for worse. Two tracks had a smooth Caribbean flavour: his own lilting Trinidad, a Money original, and the easy-skanking Running Back, written by reggae guitarist Radcliffe Bryan.

On more familiar territory, The Wish and Get A Move On were ballsy rockers. But a romantic duet with singer-songwriter Valerie Carter, Let’s Be Lovers Again, did not turn out as planned. “I fuckin’ hated that song,” Money said. “And I didn’t like her either!”View Deal

With this album, as with No Control, the title spoke volumes. In 1983, two years after his overdose, Money was still partying like there was no tomorrow. Equally, his music was focused on the here and now, embracing what he called “that sequenced synth thing that defined a lot of the rock sounds of the eighties”.

The album’s key collaborator was Duane Hitchings, co-writer of Rod Stewart’s hit Da Ya Think I’m Sexy? He and Money wrote three songs together, including The Big Crash, a perfectly crafted AOR anthem. Closer Backtrack was Eddie’s alone – after the party, a heavy comedown.View Deal

Three years after Where’s The Party? flopped, a stroke of genius gave Money the biggest hit song of his career. Take Me Home Tonight was a zinging rock’n’roll track co-starring one of his favourite singers, Ronnie Spector, reprising the Ronettes classic Be My Baby. It shot to No.4 in the US, helping drive its parent album to platinum status.

Another hit followed with I Wanna Go Back, a great song by little-known American band Billy Satellite, recently covered by Ace Frehley. Quintessentially 80s anthem Stranger In A Strange Land, one of the album’s deep cuts, was later covered by The Who bassist John Entwistle.View Deal

Money’s fortunes yo-yo’d throughout the 80s, but he ended that decade with another Top 10 US hit, Walk On Water, a smooth pop-rock number with a cute na-na-na hook, written by Sammy Hagar’s former keyboard player Jesse Harms and featuring tasty lead guitar from Money’s old sidekick Jimmy Lyon.

There was more good stuff on Nothing To Lose: a ballad, Magic, on which he really turned on the charm, and minor hit The Love In Your Eyes, for which rock legend Ginger Baker appeared in the video. But this turned out to be Eddie’s last album to break the US Top 50. While the voice was still great, his days as a major star were endingView Deal

Released in the same month as Nirvana’s Nevermind, Money’s eighth album was a million miles away from being on-trend, and duly bombed, peaking at No.160 on the US chart. But no matter which way the wind was blowing, this guy was always a class act.

Right Here opened with a ballsy version of Heaven In The Back Seat, a song by British AOR band Romeo’s Daughter co-written by super-producer Mutt Lange. Another Nice Day In L.A., the best track on the album, would surely have been a hit in the 80s. And in the video for I’ll Get By, a real heartbreaker of a ballad, Money paid tribute to his recently deceased mentor, Bill Graham.View Deal

The tone for this album was set with the opening track, Ready To Rock, its title self-explanatory, while the standout was Don’t Say No Tonight, a perfect radio rock song and a throwback to his glory days. There were ballads, too, from a master of the art, and also a little tip of the hat to Mellencamp in Let It Go (Dedicated To Jack & Diane).View Deal