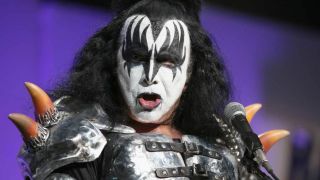 Gene Simmons – bassist/vocalist for Kiss, TV personality, multi-millionaire entrepreneur – is the living embodiment of the American Dream. An only child, he was born Chaim Witz on August 25, 1949 in Haifa, Israel.

Eight years later, after his parents separated, his mother Flora took him to live in New York City, where, in 1973, he and Paul Stanley co-founded Kiss. Simmons and Stanley have led the band throughout their career, selling more than 100 million albums.

Simmons now lives in California with his wife Shannon Tweed and their children Nick and Sophie – all stars of the hit US reality TV show Gene Simmons Family Jewels.

What are the best and worst things about being Gene Simmons?

Without sounding too cocky – although I’ve certainly been accused of that all my life – there is no negative to being Gene Simmons. You have to look at it relatively: it’s either this or flipping burgers. What’s the English equivalent, frying chips? What’s so bad about being rich and famous? I don’t understand what all the angst is all about. The only people who should have complaints are the unfortunate poor on the planet. But when you hear the ultra-rich saying: “Oh, it’s so lonely at the top,” what a load of shit. If you can’t deal with fame, don’t be famous. I have nothing to complain about.

What are your tips for pleasing a woman?

Well, the tip that God gave me is the most important one.

‘When love rears its head I wanna get on your case/ I wanna put my log in your fireplace’ [Kiss’s Burn Bitch Burn].

Can you put a figure on your personal fortune?

A round number, yeah. But I remember when I was a little boy and I read that somebody was a millionaire, and I couldn’t grasp the idea. All I knew was they were rich. So when the rich and powerful actually start throwing around figures, it seems beside the point. It seems like it’s showing off too much.

You do enjoy showing off, though.

Not the riches. Showing off my brain and my talent, my capacity for making riches, yes.

Have you considered a career in politics?

They don’t pay enough. And democracy, although it’s a wonderful idea on paper, is not the most effective form of government. The most effective, in the main, is a benevolent dictatorship. I want the police to have baseball bats, and when they find a graffiti artist to beat the shit out of them. If you put me in charge, there will hardly be any drug addicts. Certainly there won’t be any drug dealers, because the dealers will be dead.

Is there anything you wouldn’t do for money?

Blow you in front of your aunt. But if she wasn’t there, well…

Coddling drunks and alcoholics a day longer than they should have been there. Self-destructive people will suck the lifeblood out of you.

What’s the best feeling in the world?

Being Gene Simmons. It’s really easy when you’re your own biggest fan.

What was the lowest point of your life?

I’m blessed because I live in Western culture, so I haven’t had a low point in my life. My mother has. She survived the Nazi German concentration camps of World War II. We have nothing like that. When we have a bad hair day we should all just shut the fuck up and enjoy our three meals a day and having a safe place to sleep.

You can see it coming… Gene Simmons! I’m most proud of me. Why? I came from nothing. I couldn’t speak a word of your language. When I came to America, one of the first phrases I heard was: “Are you stupid? Can’t you speak English?” Many years later those people wind up working for me.

I envy anyone who does anything great. Mountaineers who climb Everest, multilinguists who speak more languages than I can, Olympic athletes, philosophers, the inventors, Nobel Prize winners. I admire greatness, and consider it a personal failing that I’m not greater than I actually think I am.

Oh, I don’t give a shit. It doesn’t matter what we think it is. All we know is we’re here and then we’re not. Or, in more poetic terms, we’re all just passing through. So if we live in Western culture, where we have a say in how we lead our lives, we may as well have a great time. Try not to hurt anybody and enjoy life. That’s about it, actually. We’re lucky to have a choice in our lives.

‘Thank you and goodnight.’

This interview was originally published in Classic Rock 164.