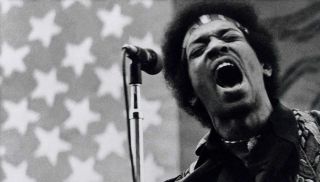 Author Corey A. Washington's book Jimi Hendrix Black Legacy: A Dream Deferred is an exploration of Jimi Hendrix's impact on Black culture. It interviews people who knew Hendrix – including his brother, Leon – alongside many voices not usually heard from in traditional Hendrix biographies.

The book examines Hendrix's influence on many genres of music – including blues, soul, funk, rock and hip hop – and shines a new light on his legacy. In this edited excerpt, Washington explores how Jimi's versions of The Star Spangled Banner painted a startling picture of a chaotic America, one that resonates to this day.

Way before Childish Gambino's burning excoriation of America's hypocrisy through his song and thought-provoking video, This is America, Jimi Hendrix had given his rendering of the national anthem the same title. He explained his rationale at a concert at the Winterland Theater in San Francisco, during the second show on October 10, 1968.

"We would like to continue on with a thing called This is America, representing the sounds and feedback which you'll hear, is really lost souls and frustration, it seems like to me," said Hendrix. "I don't know though, we're just messengers. We'll see if we can get this feeling across to you, maybe through all this racket that some people think we’re making up. (Jimi playfully changes his voice: "I don't think it's racket.")

"It’s a thing. You get tired of playing notes sometimes, so you want to get close to playing exactly what you call a 'true feeling', regardless if it's..." (Jimi plays some feedback and then a standard rock n roll riff, followed by what sounds like surf music.)

There's some great research on Jimi's relationship with the national anthem by Mark A. Clague entitled: This is America: Jimi Hendrix's StarSpangled Banner Journey as Psychedelic Citizenship. He breaks down the highlights of Jimi performing the national anthem 63 times over a two-year period between August 1968 and August 1970.

His research shows how Jimi's anthem rendition morphed into a political statement, even transforming into a call for action. Of note is Clague's recognition of Jimi 'code switching' to speak to two different sets of people, sometimes even at the same time.

For instance, when Jimi has a press conference in Harlem to announce a benefit concert for Harlem's United Block Association, a reporter asked him about his anthem performance at Woodstock. Jimi explained that the anthem was originally written in a beautiful state, but when he plays it now, he plays it the way that America is in its current state, with lots of static and friction in the air.

Jimi's manager, Mike Jeffery, spent half of 1969 and most of 1970, doing damage control, trying to get Jimi to distance himself from The Black Panthers and other controversial leftist groups. That didn't work. At the Jimi Hendrix Experience concert at the LA Forum on April 25, 1969, a little over three months from his concert at Woodstock, Jimi would make Colin Kaepernick's kneeling for the anthem look very tame.

Jimi saw what was going on in the country and used his artistic platform to speak out. Jimi ad-libs in-between playing the anthem: Jimi plays a short intro, then says: “Here's a song that we was (sic) all brainwashed with, remember this oldies but goodies.” Jimi plays some more, then briefly stops playing to disdainfully utter "BS" on the hypocritical situation going on in the U.S.

Later at Woodstock, he would tone down the vocal aggression and put that fire into his instrumental interpretation, as he masterfully and sonically painted an accurate picture of the chaos America was in, as it relates to the Vietnam War, civil rights, clashes between the haves and have-nots, hippies and squares, conservatives and liberals, and anybody else fed up with being lied to.

Jimi would continue to force the issue in 1970. On May 30th, 1970, at the Community Theater, in Berkeley California, he dedicated the concert to The Black Panthers, since they were near their stomping grounds of Oakland. A month earlier on April 25, at the Los Angeles Forum, he played another rather insubordinate rendition of the national anthem, where he referenced "the home of the pigs and the violence of the Black Panthers." To top it off, he spelled America, 'A-M-E-R-I-K.'

Jimi would be featured in the 1969 March edition of Circus Magazine, where he spoke candidly about race in America and The Black Panthers. The article was entitled: Jimi Hendrix On Black And White America. Jimi spoke about writing a song dedicated to The Black Panthers. He was asked about his perspective on America, now that he had lived in London.

Jimi: "(I) saw why people put this country down. I still love America – quite naturally – but I can see why people put it down. It has so much good in it, you know, but it has so much evil too, and that's because so much of it is based on money. That's really so sick." He then chimes in on Race Relations.

"Jimi: The black person argues with the white person, that he's been treated badly for the last 200 years. Well, he has, but now is the time to work it out, instead of talking about the past.

"We know the past is all screwed up, so instead of talking about it, let's get things together now."

Corey A. Washington's Jimi Hendrix Black Legacy: A Dream Deferred is out now.