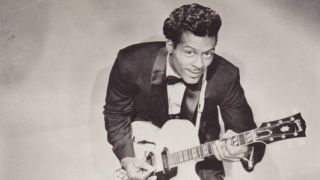 “If you ever tried to give rock ‘n’ roll another name you might call it Chuck Berry,” - John Lennon.

While debates over the authorship of rock n’ roll will doubtless rage on into history there’s no doubt that the man christened Charles Edward Anderson Berry in St Louis in 1926 has a stronger claim than most. A lover of both country music and rhythm and blues, Berry knew exactly what he was doing when he co-mingled the two on his early hits Maybellene and Roll Over Beethoven. And whilst he could hardly have anticipated the cultural revolution those (and other contemporaneous) records unleashed, he quickly learned to ride the tiger that would throw many of his peers to the ground.

Unlike Little Richard or Jerry Lee Lewis, Chuck Berry’s breakthrough records weren’t mere explosions of pent-up energy. He refined rock ‘n’ roll, injecting it with a sly humour and a sense of panache. Berry’s songs told stories. Despite being almost twice their age, he found a knack of tapping into the desires and frustrations of that newest of demographics, the teenager. It’s uncanny just how many of his early hits either describe trials and tribulations at school (the institution that most young people had direct experience of) or celebrate cars (the symbol of the freedom that they desired).

He was also one of rock’s first fully self-sufficient performers. While Elvis was dependent on a steady stream of other people’s material, Berry, ably assisted by his long time piano player Johnnie Johnson, wrote and recorded everything himself. And after a brief dalliance with manager Teddy Reig, for the last half century of his career he represented himself too.

But whilst Berry the artist was among the most important in rock history, Berry the man often left a lot to be desired. His reputation for meanness and penny-pinching was legendary and his less-than-charitable attitude towards his fellow artists meant that few were able to call him a friend. Keith Richards for one felt let down by his hero when he was asked to be Musical Director of the 1986 tribute concert movie Hail Hail Rock N’ Roll. Berry’s stubborn, condescending on-set behaviour drove Richards, and fellow guests Eric Clapton and Bruce Springsteen, to distraction. “I wouldn’t warm to Chuck Berry if I was cremated next to him,” quipped Keith after what was, by all accounts, a testing experience.

Audiences too, often left feeling as if they’d been half changed. All too aware of his legendary status, he came to treat live performances, especially during the second half of his career, as clock-watching contractual obligations. If you were lucky he’d wheel out the iconic duck walk, but encores were few and far between. And yet there would be occasions when he would go the extra mile and pull off something extraordinary. His headlining performance at Wembley in August 1972 was one such moment. Another occurred at Coventry earlier that same year when a singalong number called My Ding-A-Ling was taped for posterity. This single entendre joke would go on to become a Transatlantic Number One, the only one he achieved in his lifetime.

What produced this mindset? The few that could genuinely say that they were close to him said that his trouble with the law, especially his second spell in jail in the early ‘60s played a large part in developing his ever-suspicious outlook. Berry was sent down for illegal transportation of a minor across a state border, but the legal authorities had been hassling him for years. Arguably, his real crime was to be a conspicuously successful black man at a time when racism was still rife and on open display. It wasn’t to be the last time he found himself on the wrong side of the law either. In 1979 he was jailed again, for tax evasion, and in the late ‘80s was subject to a major scandal when it was discovered that the ladies’ toilets in a restaurant at his Berry Park resort had been fitted with surveillance cameras. A number of disgruntled women filed actions against him, but Berry settled out of court.

None of these controversies nor his elusive personality, can ever detract from his immense cultural achievement. Chuck Berry imbued rock n’ roll with guile, wit and swagger, he inspired several generations of guitarists and his name will live as long as people listen to rock music. Longer, in fact. When the Voyager II spacecraft blasted off in 1977 on its one-way mission to the outer depths of our galaxy it carried a selection of cultural artefacts to pique the interests of whatever life forms happen to chance across it. Thus alongside the usual classical suspects like Beethoven and Bach is the ringing guitar of Johnny Be Goode. Human music could have no better cosmic ambassador.