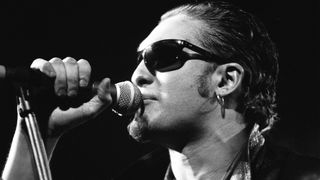 Layne Staley died in April 2002. Alone. From an overdose of heroin and cocaine. His body was discovered on April 20, seemingly two weeks after his death. He was 34 years old.

Such is the tragedy of one of the most charismatic figures to colour the rock scene of the 1990s.

As with Kurt Cobain, the untimely manner of Staley’s death has detracted from his visionary talent, his unique vocal timbre. It was the frontman who started the avalanche in 1987 when he formed Diamond Lie with guitarist Jerry Cantrell.

With a line-up completed by bassist Mike Starr and drummer Sean Kinney, and a name change to Alice In Chains, they signed to Columbia in 1989, releasing the crucial We Die Young EP the following year.

But it was their debut album, Facelift (again from 1990) that captured the spirit of a changing age. Fuelled by unexpected hit Man In The Box, it sold more than half-a-million copies in America alone, and Alice became part of the grunge vanguard.

While the musicianship was creatively crisp and morbidly vital, it was their uniquely troubled singer who gave intimacy and vulnerability to the songs. Without Staley, it’s unlikely that the band could possibly have fulfilled their obvious potential.

Over the next two years, Alice In Chains displayed a gift for individuality that shone through on the dark, acoustic Sap EP, and the inviolable Would?, the latter first appearing on the Singles soundtrack. It marked the band – alongside Nirvana, Pearl Jam and Soundgarden – as the pre-eminent driving force of a musical movement that was shaping the decade.

The Dirt album, from 1992, reinforced their claim to be possibly the most inventive artists in Seattle at this time. But it was Starr’s last contribution; he was replaced by Mike Inez for the Lollapalooza tour in America during 1993.

It was also the band’s last major tour, as Staley’s personal demons began to overwhelm his densely fragile sensibilities. Perhaps the portents were there for all to hear when the Jar Of Flies EP came out early 1994, marking a return to the acoustic upheaval of Sap. This actually made history in America, being the first EP ever to debut at No.1 on the albums chart, such was Alice’s power and popularity.

At this juncture, Staley retreated ever further into his own self-confessed drug hell (which had already been well-documented through songs such as Sickman, Junkhead and God Smack on their Dirt album).

He briefly emerged with grunge supergroup Mad Season in 1995, releasing the Above album and playing a handful of shows with them. AIC themselves put out a self-titled album the same year – which was to prove their farewell studio record with Staley.

In 1996, Alice were filmed and recorded for an MTV Unplugged performance where their frontman looked particularly fragile, and briefly opened for Kiss on part of their reunion tour. And in Kanas City, on July 3, 1996 they played their last show with Layne Staley.

Although the foursome re-grouped to record two new songs, Get Born Again and Died, for their 1999 box set Music Bank, it was only a temporary respite, as Staley’s addictions spiralled out of control.

His death marked the end of an era for one of rock’s greatest ever bands.

This article was originally published in Classic Rock # 94.