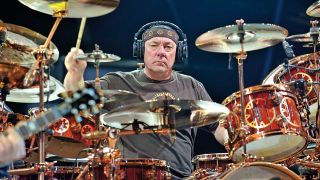 At the final show on Rush’s R40 tour at the LA Forum, Queens of the Stone Age drummer Jon Theodore was so moved by Neil Peart’s playing that he was moved to comment: “The solo was so impressionistic. Stripped down to just Neil and the drums. No vids or sequences. I never saw that much flow and colour and instinct set free in him before. Just fucking beautiful.” The comment got back to Peart, and here’s his response.

Let me just say right off, “Thank you Jon, more than you know.”

I can only try to express how much it means to hear that somebody got it – what I was trying to achieve with that solo. A lifetime of achievement, really.

Yet as I developed that solo through months of rehearsals and even into the tour, I was a little perplexed that I never received any feedback, from band-mates or crew members. Sometimes people seem to take the attitude, “Aw, he already knows he’s good. He doesn’t need to hear it again.”

Especially when we’re pushing ourselves way out on a limb like that.

Day after day, week after week, after each time we rehearsed that part of the show and I delivered my sketch of the solo, I was mildly concerned by the ringing silence. What did it mean? I worried that my ambitions were too high – my reach exceeding my grasp. (It often does, honestly – pretty much always – but maybe this time by too much.) I wasn’t going to ask anyone what they thought – fearing the answer too much! In any case, I was proceeding entirely on faith in an idea, and that solitary dedication was not easy.

My vague design for that solo was deceptively simple. I would approach it as if I was just sitting down at the drums to start playing – to exercise the improvisational skills I have been working on for, oh, about ten years now. Technically, I was determined to exemplify everything I thought I knew about drumming, and everything I love about the drums – almost 50 years of experience and passion had to go in there somehow.

Yet despite those conceptual and technical constraints, almost immediately I felt it becoming a story, a rhythmic narrative. It echoed a discovery I made back in the summer of 1999, when I made a tentative return to the drums after an “enforced absence” of about two years.

As recounted in my book Ghost Rider, that day I sat behind the drums and just started playing… my story. The sad part, the travelling part, the “little victories,” the angry part, the lost and bewildered part – it was all in there.

All these years later, when I saw I could use that approach as a repeatable frame for an improvised solo, I wondered if I might give that story a soundtrack at the same time.

I began to visualize, and thus inhabit, an imaginary movie, retold, re-edited, an re-scored for every performance. (So a modest goal, then.)

The band’s long-time technology consultant, Jim Burgess, helped me put together a palette of musical and textural samples on the MalletKat, and I experimented for hours with different ways to combine them. Even the samples had to be incorporated in a different way than ever before, because there were no other triggers on the ’70s-style drumset I was playing in the second set of the R40 tour. (Truth to tell, I would much rather have soloed on the “modern” setup I played in the first set – much better ergonomics and more “musical” layout – but… that’s the way it worked out.)

Inevitably, during the development of that solo, and even with each performance of the tour, certain themes and dynamics emerged and were repeated, more or less – though never exactly the same, or in the same part of the story. Sometimes I would try to repeat a previous accident and fail – so an unexpected nuance would occur, sending the narrative in a different direction. The important shared quality was that every idea had been born in spontaneity.

All through band rehearsals I ran through sketches of what I was aiming for – rhythmic patterns conversing over favoured ostinatos (repeating rhythmic bases), polyrhythms and counter rhythms laid across each other, the rudimental snare work I always enjoyed riffing on – all the while letting it evolve naturally.

But again, in all that time, playing that “vision” every day for weeks, nobody ever said anything. Not my long time trusted drum tech Lorne “Gump” Wheaton, not my band-mates, not Brad in the mixing room, not Jim Burgess, not the crew guys, nobody.

Finally, some weeks into the tour my friend Matt Scannell told me after a show that he really liked that solo – how it seemed to tell a story.

I could have kissed him. (I probably did, actually. We’re like that.)

Late in the tour another friend, Chris Stankee, Berklee-educated drummer and long time Sabian pal (and riding buddy), had seen a few of our shows, and described that solo in a way that swelled me up big time.

“It’s like the marriage of you as lyricist and you as drummer. It’s the* phrasing*. And with all that, the technique doesn’t go over the audience’s head.”

So with those few “nods,” and now Jon’s, I can rest easy knowing I accomplished what I set out to do, at least in the eyes and ears of those who could “receive” it.

I’m so glad some people do…