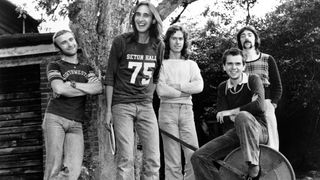 “I don’t think it’s crazy, no,” says guitarist Steve Hackett. “I wouldn’t say it’s particularly misunderstood, either. Though it is hugely open to interpretation.”

He’s talking about Supper’s Ready, the 23-minute-plus opus that runs for almost the entire length of side two of Genesis’s 1972 breakthrough album Foxtrot.

A cornerstone in the story of progressive rock, Supper’s Ready found this still developing genre reaching its apogee. There had been double-digit-length album tracks before – not least Genesis’s own 10-minute The Musical Box – but nothing quite as conceptually epic, as ambitiously executed as Supper’s Ready.

Constructed from seven distinct parts that form a jagged musical whole, it instantly rose to become perhaps the most famous and influential musical adventure in a genre then bursting its creative banks with all-time classic tracks: the template for the ornate, classically influenced, lysergically-charged, heroically daft, peculiarly English variety of progressive rock that then ruled the world.

According to keyboardist Tony Banks: “When we started it we thought we were writing a kind of follow-up to The Musical Box, and it was going along quite nicely. Then we had this pretty-pretty song, Willow Farm, on its own, and thought, what if we suddenly went from there into this ugly, descending-chords sequence? No one would be expecting it. And once we got into that, we thought, well, we’re here now, let’s carry on, with freedom, and see where it leads us. When we put the whole thing together and heard it back for the first time, we went: ‘Oh, this is actually pretty good.’”

Genesis’s former guitarist Steve Hackett insists now, however, that he was not convinced it was a good idea at all: “I thought, no one’s gonna buy this, because it’s too long. The [lyrical] references are too far-flung. It’s totally ambiguous. I thought the first time [Charisma Records chief] Tony Stratton-Smith heard it he was gonna say: ‘Sorry, boys, game’s up, contract’s cancelled, you’ll be hearing from our lawyers.’” Instead it was Stratton-Smith who positively encouraged the band to take their music as far as it could go, according to Foxtrot producer David Hitchcock.

Seeing his role as “essentially a facilitator” Hitchcock says his greatest contribution to the track was “explaining they didn’t need to play it all the way through to record it, that we could do it section by section, with cross-fades and edits, then put it all together later. That allowed them to concentrate for the three or four minutes of each section, and get the best possible performance, while also allowing them to bring in different sounds for each section, rather than playing it straight through with one long, homogenous sound.”

When Gabriel began singing over the keyboard solo in the section titled Apocalypse In 9⁄8, Banks admits “I was pissed off. ‘You’re singing on my bit!’ Then I realised it now had all the excitement we’d been trying to create, especially the ‘Six Six Six’ section. You have a lot of drama in the chords themselves, then what he did on top just took it to another level. Yes, that half-minute or so is our peak.” The other big battle Gabriel won was over the lyrics. “We were all involved as lyricists on Foxtrot per se,” says Hackett, “but Pete insisted on writing all of the lyrics to Supper’s Ready himself.”

The rumour subsequently spread that the core of the lyrical narrative was based on a ‘supernatural’ experience Gabriel had gone through with his then-wife Jill; that Gabriel had been convinced she was possessed, and brandished a makeshift cross out of candlesticks, to which she reacted violently.

According to Hackett, however, the situation was probably more prosaic. “I believe there’d been some drug taking going on. I believe she was having a bad trip at one point, and that Pete and a friend managed to talk her round and get her out of the horrors or whatever it was. So that’s a part of what the song was about, but in a way there’s a kind of redemption implication that goes with that.”

Gabriel later claimed other parts of the lyrics were inspired by a late-night sighting of seven shrouded men walking in his garden.

There were also lighter moments like Willow Farm, which Hackett not inaccurately describes now as “part Teddy Bears’ Picnic, part I Am The Walrus.” Plus sideways mentions for topics as seemingly disparate as Winston Churchill in drag, firemen, New Jerusalem, and not forgetting: a flower.

Whatever one took from the lyrics, Supper’s Ready immediately assumed the mantle of all-time showstopper at Genesis concerts, Gabriel going through several ever more outlandish costume changes before ascending to the indoor sky in a silver suit at its climax.

Today Supper’s Ready is up there with Stairway To Heaven and Dark Side Of The Moon as one of the more monumental profiles on rock’s Mount Rushmore.

“I still enjoy it,” Gabriel said recently. “I did consider playing it with my normal band, but there was a lot of resistance about trying to learn it. It’s still something I wouldn’t mind looking at, or maybe just sections of it. Oh, I don’t know, though, it’d be nice to do it as a whole piece.”