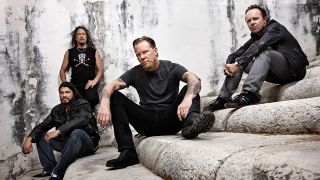 The COVID-19 pandemic has stopped everything from gigs to album releases to hanging with your friends. Things are shit right now, but that only makes the future more exciting. We can’t wait to get all of this behind us and, waiting for us in the light at the end of this tunnel, is new music. Lots and lots of new music. To help you weather this dark time, here are twenty albums you should be excited for, coming once lockdown has come to an end

In September 2019, Metallica teamed up with the San Francisco Symphony Orchestra for the second time, giving their classic tunes some dramatic pizzazz. It enjoyed a one-night-only cinema release and, this summer, the live film will finally be expanded into a full box set. “S&M2 is coming out in August,” Lars Ulrich recently confirmed on Jimmy Kimmel Live.
Release date: August

Avenged Sevenfold reported in 2019 that their long-anticipated eighth was due to arrive this year. “I never deal in absolutes, but right now it’s leaning heavily towards 2020,” guitarist Zacky Vengeance said of when to expect new music. There’s no set release date, but bearing in mind their last album, The Stage, got a surprise release, it could conceivably turn up tomorrow.
Release date: TBC

Where 2015’s The Pale Emperor found Marilyn Manson in post-punk Bowie mode, 2017’s Heaven Upside Down reunited the Antichrist Superstar with his industrial metal ways. Whether or not his next album – recorded with new collaborator, outlaw country star Shooter Jennings – will follow in the same vein or see Mazza deviate yet again remains to be seen, but we do know it’s completed. “Finished masterpiece album,”  said Manson in April. “Shit is gonna get real.”
Release date: TBA

Megadeth have been holed up in Dave Mustaine’s Nashville home studio recording 18 songs for their 16th album. Says MegaDave: “Dirk [Verbeuren, drums] and David Ellefson [bass] both just finished their parts,” the frontman told SiriusXM in mid-June. He’s also placed it in his top five Megadeth albums of all time, while Ellefson has likened it to their 1992 classic, Countdown To Extinction. No pressure there then.
Release date: TBA

Deftones fans are in for a double treat in 2020. Drummer Abe Cunningham has revealed the Sacramento quintet are eyeing September as the release date for their impending album. Then, the band announced Black Stallion: an “electronic, beat-driven” remix collection that celebrates twenty years of White Pony. The two will be the first new music we’ve had from them since 2016’s Gore, so maybe they’re overcompensating for the long wait?
Release date: September / TBA

On their first album in nine years, Evanescence are being as up-to-date as possible, releasing The Bitter Truth incrementally on streaming sites throughout 2020. The unveiling started in April with the single Wasted On You, and feels perfectly timed in a year where physical releases are being delayed left and right. “People need new music now more than ever,” says Amy Lee. “We’re not going to wait to share it because who knows what tomorrow brings?”
Release date: TBA

Slipknot/Stone Sour frontman Corey Taylor has at last finished his long-awaited solo album, wrapping up recording during lockdown. Corey says it’s comprised of classic rock songs with “a Sweet/Slade vibe”, as well as material influenced by Johnny Cash and Alice In Chains. “Some of it is a reflection of being sick and tired of this nutless rock’n’roll I’ve seen lately,” he told Kerrang! last year.
Release date: TBA

Gojira are playing their cards close to their chest with their next album, offering minimal detail on what to expect. Will it be a death metal battering akin to their early work? Or a more sophisticated odyssey like 2016’s Magma? No one knows, but we know it’s happening soon. In February, frontman Joe Duplantier simply said, “It’s going to come out; just be patient, okay? Give us a few months.”
Release date: TBA

According to guitarist Bill Kelliher, the next Mastodon album sounds brutal as fuck. “The stuff I’ve written is not quite as notey as [last album Emperor Of Sand],” he recently said. “It’s definitely got a more, like, Neurosis heaviness.” He’s also promised “Radiohead-ish, melodic” singing, expanding the vocal athletics that really shone on their last LP. No release date, though a new song will appear in the upcoming Bill & Ted movie Bill & Ted Face The Music.

Bring Me The Horizon – Post-Human

Bring Me The Horizon will release four new EPs in the next year, collectively under the name Post-Human. The first has been preempted by the heavy synthcore singles Ludens and Parasite Eve. “The record will follow a similar tone [to the singles],” Oli Sykes told Kerrang!. “They’ll all be very different,” he adds, calling the first EP “battle songs”. As for the three to follow, expect anything from pop to metal to electronic.
Release date: 2020–2021