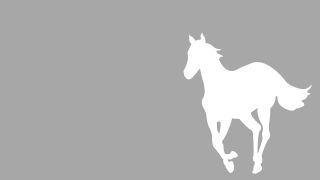 Generational angst and anxiety wasn’t any less acute twenty years ago than it is today, but its roots weren't always as clearly defined. This may be why some dominant strains of aggressive rock music at the time turned their glare inward or railed against phantom enemies. Others – those that articulated it best in 2000 – often did so through a layer of either sonic or lyrical abstraction: Primal Scream’s XTRMNTR, Radiohead’s Kid A, and, certainly, Deftones’ White Pony.

White Pony was the point where Deftones made their definitive leap forward. That was the consensus even before it came out, and it still holds true. Almost immediately it became one of those rare records, like Rubber Soul or Zen Arcade, that elevated its scene and pulled the band’s audience along with it. Some of the credit for the album’s power and longevity is due to that audience, who grew with them at this critical moment. Deftones went both bigger and smarter on White Pony, and their fanbase didn’t flinch. Their songs began to stray down haunted corridors and bend into quieter corners, and few wished for them to return to the Bored old days.

“This style of music is really big right now, so it’d be so predictable to want to jump right in and...take advantage of that kind of success,” said the late Deftones bassist Chi Cheng to MTV that year, referring to the nu metal phenomenon then at its peak, in a short news feature about the then-upcoming release of White Pony. “We would rather stick to what we’ve been doing for the past 10 or 11 years, do something that we feel comfortable with, have the faith that that’s what [our fans] expect from us.”

Cheng’s quote was a revealing look into the band’s mindset. To them, ‘sticking to what works’ meant pushing forward. “You can’t get comfortable,” frontman Chino Moreno said in the same interview – but, as Cheng put it, not letting themselves get comfortable was something that Deftones felt comfortable with.

Yet there was an element of comfort in Deftones’ music that was lacking from that of many of their immediate peers. Anger and release were the framework, but not the sole point. The kinds of connections their music offered ran deeper. The be-all, end-all wasn't to be the heaviest band out there, or even the heaviest band on mainstream rock radio – though at one point guitarist Stephen Carpenter did want White Pony to be their heaviest record yet.

It was on their second album, Around The Fur, that Deftones found warmth in their weight. Part of that was down to Terry Date’s production, and another part was in the songwriting. Around The Fur soared where debut Adrenaline scraped. That 1997 disc was the breakthrough before the breakthrough, and if there’s one song from that album that cemented the new dynamic and pointed the way to their early ‘00s vibe, it was Be Quiet And Drive (Far Away). The song is a collision of sparks that already hung in the air around Deftones but which would blow up on White Pony: Moreno’s still-ocean verses and rogue-wave roars, an undeniable sense of melody underneath the downtuned guitar riffs and throbbing rhythm, and not just tainted love but a kind of desperate, queasy romanticism.

Be Quiet And Drive (Far Away) pulsed with an escapism that you didn’t want to leave, and White Pony pushed that even further. Moreno’s words scratched open visceral glimpses into unwell fantasy worlds. A psychic storm rips across the album, but there is shelter in it as well. Lyrically, Deftones were no longer content to be malcontent Sacramento skateboarders, and White Pony often reads like a sick-minded screenplay.

This is an intriguing facet about how and why this became the record with which Deftones broke the platinum barrier. Their genre-blurring and resistance to fitting in drew attention, but White Pony is also notable for carrying some of Moreno’s most unsettling visions. That may have had something to do with why their record label, Maverick, weren’t sure the album could provide a second hit single after Change (In The House Of Flies). Digital Bath, for instance, was polished enough for a primetime slot on MTV or rock radio at the time, but it’s also about electrocuting someone in a bathtub for gratification.

One reason Digital Bath is a focal point in their catalog has to do with White Pony’s running order. As the second track after the opening onslaught of Feiticeira, it served a dual purpose. For insiders it said, “See, we’re still Deftones, but check this out,” while for outsiders still not sold it said, “Wait – there’s more going on here.”

Beyond the blurring together of sex and violence, punctuated on either end by the shifting kidnapping scenarios in both Feiticeira and Passenger, White Pony has a way of conflating horror movie scenes with the typical growing pains of being a teenager. This is what gives it such personal traction with those who grew up with Deftones, and those that find their music today.

It goes well beyond the obvious ode Teenager, though that tranquil core White Pony track drives home a recurring theme in the chorus 'Now I’m through/With the new you'. Everyone can remember at least one friend from their youth who became a different person and drifted away. In Teenager, this fracture is a romantic break-up set against a shockingly gentle trip-hop backdrop. In Change (In The House Of Flies), it becomes a revenge fantasy about pinning the new butterfly and pulling off its wings.

Rx Queen is all young-love-on-the-run in one verse and parasitic nourishment in the next ('I’ll steal a carcass for you/Then feed off the virus'). Knife Prty has an unmistakable whiff of underage house party politics and awkwardness: 'All of the fiends are on the block/I’m the new king/I’ll take the queen/...We’re all anaemic in here.' Even the aforementioned kidnappings in Feiticeira and Passenger connect to the common teenage feeling of not having the kind of control over your life that you want.

Elite is an attack on superficial status-seekers, with a humid mantra, 'When you’re ripe/You’ll bleed out of control', that draws literal horror out of coming of age. Elite is the most hammering track on White Pony (which makes the fact that it won a Grammy all the more curious), but even its four brutal minutes are not without flashes of nuance. 'You’re into depression/’Cause it matches your eyes' is one of those underrated lines that simply couldn’t have come from, say, the Mushroomhead songbook.

Almost all of the banes of adolescent existence are present and accounted for in between the lines on White Pony, and the album takes them all to task. It is the older sibling standing behind you in the face of your tormentors – even if just imagined, alone in your bedroom. The pushback comes to a head on the closing Pink Maggit. Though it is another track fraught with abstract violence, the message that '...back in school/We are the leaders of all' is clear enough, and Moreno stated the song was intended to inspire confidence. The not-so-subliminal message was that Deftones were on your side.

Moreno most often got the credit for being the one with sensitive music sensibilities, but Deftones was never a few metalheads fronted by a Morrissey fan. Carpenter was as big of a Depeche Mode fan as Moreno, particularly of their 1997 album, Ultra. One of drummer Abe Cunnningham’s major influences was Stuart Copeland of the Police, and though he considered himself a funk rock drummer his personal tastes were diverse, as were Cheng’s. The breadth of songs the band have covered, from Sade to Weezer, attests to this. That they met in the middle on heavy metal isn’t surprising given the youthful and geographical context of the band’s origin, but it also isn’t surprising that over time they transcended genre constraints in an organic way.

When White Pony dropped in the summer of 2000, Deftones were on their fifth year or so in the public eye, but had actually been together for twice that long. The recording process had been their most challenging yet, but they came out of the studio knowing exactly what they had on their hands; in interviews they weren’t shy about saying how good the album was. White Pony amplified and refined what Around The Fur had introduced, and threw in some major new twists as well, but it wasn’t a stark turn or unforeseen change. If anything, the tracklisting seems carefully ordered to gradually bring old fans up to speed with where they now were, guiding them song by song, so that only by the end of the album did they have the full picture of the new-model Deftones.

This is partly why the label’s push to add the reworked version of Pink Maggit on the 2001 re-release of the album was a misstep: Back To School (Mini Maggit) played to Deftones’ previously established strengths. It pointed backward, not forward. Natural impulse and response to their immediate surroundings was what directed the band’s progress to the multi-dimensional White Pony, the monolithic self-titled album that followed, and what they’ve done since [it's worth noting that Moreno has confirmed Back To School won't be included on their planned White Pony reissue].

That realness, unpretentious but not unschooled, has related and connected them to the adolescent segment of their audience in deep-rooted ways. They weren’t there to sell your life to you, they were there to commiserate and vent, and maybe also nudge metal a little bit further into the future.