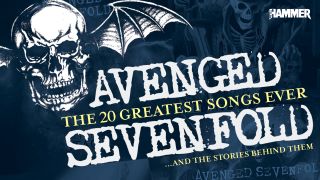 It took countless office arguments, last-minute reshuffles and extended Powerpoint presentations featuring a lot of deathbats. We amassed the 20 best Avenged Sevenfold songs to have seen the light of day in the two-decade career of one of metal’s greatest modern bands. And then ranked them.

From the songs that broke them to their boldest sonic experiments, we present the ultimate, career-spanning countdown of all things A7X.

That Avenged still occasionally flirt with an instrumental version of this song at their live shows demonstrates what an enduring impact it has had. A piano-led love song that swings into full-blown heavy metal power balladry around halfway through, it didn’t just offer fans a glimpse into Avenged’s softer side, but also showed that they knew how to turn on the cheese in style when they needed to. Come on, you still can’t hear that second verse with a mate without bursting into the vocal harmonies. The band were so confident in it, it served as the lynchpin of their very first EP back in the spring of 2001, as well as launching a spectacularly low-budget video. Bless ’em.

Avenged Sevenfold laid their stadium-sized ambitions bare with their sixth studio album Hail To The King – a fire-breathing, chest-beating beast full of big-ass riffs and rumbling grooves. It proved divisive to some sections of the metal community – This Means War in particular drawing some flack for its shameless similarities to Black Album-era Metallica – but for those looking for a no-nonsense, kickass heavy metal record, the band had struck gold. And rarely more so than on the album’s opener, all clattering drums, tolling bells and stomping groove. Lyrically, the band fully re-embraced the hellfire and brimstone approach that characterised much of their early material. It was a simple formula that helped propel the album to becoming Avenged’s first ever UK No.1 record.

Oft overlooked but richly deserving of its place in any self-respecting Avenged fan’s all-time-greats list, Sidewinder is a sinister, slithering beast well matched to its namesake. ‘You can feel my strength destroy you, straight to the heart from the venomous bite’ hisses Shadows, using up as many snake references and metaphors as he possibly can in what seems to be a song written about an unnamed subject who is, to be frank, a bit of a slimy cunt. Which is probably harsh on snakes. They’re not even slimy. Still, the song unveils more and more layers as it progresses, lurching into Iron Maiden-esque gallops, acoustic touches and, finally, full-blown flamenco. It’s the sound of a band having an absolute blast and, not for the first or last time, showcasing a refusal to restrain themselves when it comes to chucking in as many left turns as they fancy.

Avenged Sevenfold were never really ones to wind their necks in, were they? On this, one of the OC five-piece’s most proudly (and loudly) defiant songs from the City Of Evil era, the band seemed to take aim at anyone who had stood in their way. Exactly who had incurred their ire was unclear, though. Could it have been the press (‘Keep on writing, you’re just raping yourself’)? Cynics in the scene (‘Don’t try to judge or take shots at me’)? People leeching off the band (‘Crawl on me you fucking parasite and I’m gonna take you out’)? Whoever they were gunning for, they weren’t doing it quietly, which is probably why they wrote an absolute ripper of a song to go along with it.

Paying homage to Ozzy Osbourne’s classic Mr Crowley with a spooky organ intro, Critical Acclaim quickly set the tone for an album that’d be filled to the brim with atmospheric flourishes, shifting moods and more experimentation than ever. It also further established that The Rev was a vital part of the Avenged machine by providing one of metal’s very rarest tricks: having a drummer sing the chorus. The rest of the track features plenty of that unmistakable, Rev-driven, mid-00s Avenged stomp, backed with crunching riffs, juddering groove and a particularly vitriolic performance from Shadows, the frontman practically apoplectic as he rages at those who criticise the US from within. ‘They’ve never contributed a fucking thing to the country they love to criticize’ he rages. Tell us what you really think, pal!

Avenged were looking to life’s big questions as they approached their expansive and progressively tinged seventh studio album. It resulted in a record that was, even by their lofty standards, conceptually loaded and densely layered – which is probably why God Damn served as such a perfectly placed, heads-down, tits-out metal banger. The only track on the album to come in under four minutes, it’s a relentless, breakneck song, mixing abrasive, Slipknot-styled riffs with sprinklings of NWOBHM-tinged guitar harmonies and some thunderous drumwork by recently joined and former Bad Religion sticksman Brooks Wackerman. For a band who had seemingly left their meat’n’potatoes sensibilities on the Hail To The King album, it was good to know they could still put the pedal down and just smash out the good stuff when they fancied it.

The first track officially released from City Of Evil showcased Avenged embracing their 80s influences in style, deliriously pompous twin-guitar attacks and galloping drums setting the tone for what was to come. That said, it wasn’t all NWOBHM-aping cheese by any means – Shadows’s ‘WOOOOOOAH-YEAAAH!’ refrain cuts through a breakdown so full of groove that Vinnie Paul would have been left wondering if the band had nicked one of his brother’s old demos. The band’s multi-harmonised vocals over certain parts of the song also hinted at the deeply layered delights that were to come on the album. While it doesn’t remain as celebrated as other cuts from the City Of Evil album, it remains a damn fine song in its own right, and served as the perfect taster-teaser for the future.

While the original Chapter Four demo that the band produced was hella decent, the end product wasn’t just heaps better, but almost unrecognisable. Beefed up, cut up, patched up, trimmed down and slowed down just a tad to let those big-ass riffs breathe a bit, the final version of the track ended up being one of the standout moments of Waking The Fallen and, for many, the song that defined Avenged’s early years. As with much of the band’s material from that era, this was heavy metal snuck through the gates of metalcore, as epic twin leads writhed around chugging hardcore riffs and a typically ferocious performance from The Rev, smacking his kit to smithereens like it owed him money. And we loved every single second of it.

One of The Rev’s most beloved compositions took everyone by surprise – including the band. “Jimmy was actually kinda AWOL for a little while,” recalled Zacky. “He came one day and said, ‘I have a song for you guys.’ Little did we know that he had this full song that he’d been hoarded away in his house writing. We heard it and flipped out.”

As with many of The Rev’s concoctions, Afterlife was multi-layered but catchy as fuck. Its pop sensibilities were underpinned by some immense musicianship and a sense of sombreness carried by its subject matter: a man who has reached the afterlife and is pleading that he has unfinished business back on Earth. The song’s gorgeous orchestral elements were recorded live in the studio with arranger and frequent Danny Elfman collaborator, Marc Mann – and that’s not all he contributed to the album…

Sounding like the soundtrack to a Tim Burton movie that never was, A Little Piece Of Heaven was Avenged finally going Full Danny Elfman, channelling the legendary composer to the max by bringing his former Oingo Boingo collaborators Steve Bartek and Marc Mann along for the ride. Roping in spooky piano tinklings, violas, trombones, clarinets, a choir – hell even a saxophone or two pops up – it bounces along with equal parts mischief and melancholy, eventually exploding in a blizzard of demented horns, drum rolls, screams and strings. You may not be too surprised that this song, like so many of Avenged’s more unique moments, came predominantly from The Rev.

“It was a conjuring of Jimmy’s genius,” confirms Syn today. “He had these parts in his mind and he was always playing piano. Whenever there was a fucking piano, he’d always be playing it and it would always be original stuff. He’d draw a fucking crowd of all of our friends and we couldn’t wait to hear it, the new shit. Then he wanted to finish it because it started picking up momentum and he really got a kick out of the chorus. Jimmy wasn’t the guy who needed a pat on the back, but he was really proud of that chorus. It was a little bit of a joke, too; when he’d sing it, kind of like Scooby-Doo. He thought it was such a cheesy kind of jingle, so catchy and so syrupy. He just thought it was so funny to juxtapose that with the lyrics. We all loved it.”