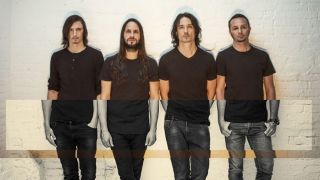 Coming from the sleepy suburbs of Bayonne in the south-west of France, it was never going to be an easy journey from Gojira to go from death metal curios to  festival headliners. But against all the odds , the Duplantier brothers – vocalist/ guitarist Joe and drummer Mario – have masterminded one of the most unlikely ascents in the history of metal. There are many reasons for this, but the main one is that Gojira have never released a dud record. Which makes ranking their discography from worst to best a tough task, but we've done it.

Not a bad album by any stretch of the imagination, but it is clear that The Link is the weakest, erm, link in the Gojira chain. The production feels weaker, robbing the band of that Earth-shattering power that they are now known for, Joe Duplantier’s voice had yet to hit the remarkable heights of viciousness that it would do and the wide, expansive metal that they absolutely nail on their next effort isn’t quite under their command here. It’s certainly a stylistic left turn from the straight-ahead death metal of their debut, but The Link often feels like a band who have just had a great idea, but have yet to execute it correctly. Saying that, Death Of Me is excellent, and a hell of a journey, and there is much to admire here, but it still feels like a work in progress.

The band's debut album sounds a million miles away from where they are now, but Terra Incognita has actually aged incredibly well. Terra Incognita showcases a band wearing their influences very clearly on their sleeve: Death, Morbid Angel and early Sepultura. Highlights are the odd rhythmic time signatures in the second half of Love, which gives way to some pure death metal riffing, and the crushing Lizard Skin which slows down to a slow grind before singeing the listeners with some brutal blasting. They’d comfortably top it, but this record is still a great start.

The idea that a band could make three albums that are better than The Way Of All Flesh seems insane, but that reinforces the argument that Gojira are one of metal’s all-time greats. The opening, spidery guitar part that starts everything on Oroborus is one of the most recognisable pieces of Gojira’s back catalogue, and it never really lets up from there. The likes of The Art Of Dying, Vacuity and Adoration Of Noise (featuring a turn from Lamb Of God’s Randy Blythe) are just stunning. Why is it so low then you ask? Well, we’re going to be splitting a lot of hairs from here on in, and it’s maybe a little too on the lengthy side, shave a little off here and there and it is inarguably as good as anything the band have recorded.

Written in tribute to the Duplantiers’ late mother, Magma is where Gojira really stepped into a more sombre and achingly melodic realm. The funeral procession-like march of opener The Shooting Star showed that this would be a very different record than what had come before. Some fans rejected the lack of “heaviness”. which showed a pretty blinkered understanding of what heavy actually means – the emotional resonance of The Cell and the title track is weighter than any number of blast-beats and thrash riffs could ever be. One of modern metal’s most personal, touching and beautiful records, the only reason Magma isn’t higher in this list is the nagging feeling that Gojira will nail this style with even greater success in coming years.

The bridge between Gojira’s past and future, L’Enfant Sauvage manages to lean heavily on the melody and mood that they were to embrace on Magma whilst still delivering the absolutely, violently heavy metal they were famous for as well. The way that Pain Is A Master slowly introduces itself before crushing your skull is mightily impressive and the gruff, gothic croon of Born In Winter’s first couple of minutes is an unsettling experience, while the one-two-three punch of Explosia, the title track and The Axe might be the finest run of songs of their career. It’s not a spot that they spent too long in, but this is a truly brilliant example of a band transitioning, juxtaposing their brutal roots with something more ambient and subtle.

It’s an almost impossible choice, but if there is one album that really defines everything that is truly great about Gojira, then it’s From Mars To Sirius. Listening back to it today it is clear that this is the point the band took their earlier death metal stylings and made them bigger, grander, bolder and more inventive. The sheer power of songs like Backbone and From The Sky have never been surpassed, The Heaviest Matter Of The Universe is an aptly named tsunami of noise and the more melodic touches, such as the acoustic From Mars that prefaces the crushing To Sirius or the ethereal beauty of Flying Whales brought an entirely new dimension to Gojira’s music. They have gone on to do some incredible things, but they’ve never sounded quite as good as they do here.