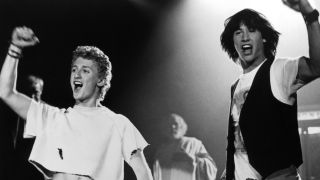 The 1980s was the golden age of rock and metal movies. From world-beaters like This Is Spinal Tap and Bad News to deservedly forgotten cheeseball horror flicks such as Trick Or Treat, you couldn't move for comedy rock stars shoving cucumbers down their trousers, clichéd Satantic heavy metal bozos or Ozzy Osbourne hamming it up as a TV evangelist.

But none are as beloved as Bill & Ted’s Excellent Adventure, the glorious 1989 comedy that introduced the world to William S. Preston and Theodore ‘Ted’ Logan, a pair of suburban metalhead doofuses whose perpetual naivety was matched by their love of loud guitars.

The movie was a surprise hit, spawning a mega-successful sequel in Bill & Ted's Bogus Journey and launching the career of Keanu Reeves (aka Ted). With a belated third installment, Bill & Ted Face The Music, on the way, we caught up with co-star Alex 'Bill' Winter to look back on the making of a cult classic.

What did you think when you read the script about two teenage metal fans who travel through time kidnapping historical figures?

“Ha ha! It was at a time when there were so many teen sex comedies, and I was, like, ‘I can’t tell if this is a straight-up sex comedy or something else.’ But what struck me was that you had these two guys in high school with this affinity for music and language. It reminded me of being 11 or 12, having a friend’s older brother who turned you on to Rush. Listening to 2112 in the attic and thinking, ‘Wow!’”

“Yes, I was in a band myself, and a lot of my friends were in bands. I was friends with the Red Hot Chili Peppers, with some of the Butthole Surfers and some punk bands. We were all the same age, so it was kind of a peer group thing.”

Did you know Keanu Reeves, aka Ted, beforehand?

“No. But we auditioned for the thing so many times that we became friends. We both played bass and rode motorcycles, so we’d go to the auditions and then go back to one of our houses and jam on our basses, which was hilarious.”

“Lost Boys [1987 vampire movie featuring Winter] was a legitimately wild set.  We very much looked like a band and everybody on that film behaved like they were in a rock band. Bill And Ted was a lower-budget independent film, so it was more innocent. When we finished each day, we’d just go to one of our rooms and jam all night.”

When did you notice that people loved the movie?

“I was off shooting a music video the weekend it came out, and I literally became super-famous overnight. I’d grown up as a child actor, but that was the only time I experienced it like that. It really hit me months later when I was in Paris – there was a bunch of skateboarding kids, all talking like us.”

What was it that people liked about it?

“It’s really funny, the language is great and the characters are endearing. People can relate to the idea of two close friends that are slightly at odds with the world and retreat into music and into their imagination. Plus, it showed that metal fans aren’t necessarily doped-out or super-decadent. I was close to Lemmy for years, and he was the sweetest, most down-to-earth guy. And I remember being backstage at an AC/DC show and they were knitting! Then they blew the lid off the place.”

You've been making a third movie, Bill & Ted Face The Music. What was it like stepping back into Bill’s shoes?

“I did a lot of preparation for it, but it doesn’t leave you. It was very natural. Maybe embarrassingly so!”

When was the last time someone came up to you and said ‘Excellent!’ then started playing air guitar?

The time has come, dudes! Your first look at #FacetheMusic is here! In theaters August 21, 2020. pic.twitter.com/K4tXKihPemDecember 17, 2019