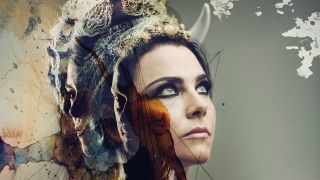 Amy Lee is in a playful mood. Despite talking to press all day, the Evanescence singer and gothic rock superstar is warm and chatty, anticipating our next question with a, “C’mon, what you got, whatcha got?” and giggling. “You’re my last in a looong block of interviews,” she tells us in her throaty, sing-song voice before we begin – but to her credit, it’s clear that when it comes to talking about Evanescence, she’s so fiercely proud of her band that she relishes the chance to set a few things straight.

Over 22 years, Evanescence have continued to defy expectation. From their humble, teenage beginnings in the 90s to the overwhelming breakthrough of Bring Me To Life, the song that became ubiquitous on every music channel for its iconic depiction of Amy Lee as a kind of gothic Rapunzel, to their new record Synthesis, an orchestral retrospective of their career, there’s a lot of ground to cover. Yes, with just three studio albums in 20 years, they’ve appeared to have some long breaks, but Amy is adamant that it’s all part of a process that’s allowed the band to continue.

“People are like, ‘Oh, so you’ve been hanging out and doing nothing for five years, how come?’” she says sardonically, referencing the last hiatus following their third, self-titled album, released in 2011. “It’s never like that! We toured for a year and a half, and then, you know, I had a baby, blah, blah, blah…” she trails off, laughing.

It quickly becomes apparent that she has a tendency to inject humour and gloss over some of the more personal aspects of her life, serving as another reminder that we’re talking to someone who at one time was a bona fide megastar, thrust into the limelight at 21. When she gets serious is when talking about her music, explaining the need for her latest break: “To make something you really mean, for me, means I have to go live my life for a while, figure out who I am again and have some experiences I need to get off my chest. I need to step away and not feel like a–” she hesitates before saying the next word – “a ‘rockstar’ any more. I need to go be Amy.”

“And it’s beautiful, because as much as I’ve been ready and willing to abandon it completely, it always leads me back to Evanescence,” she says with certainty. “I’m very proud, still – more than ever, even – of our oldest music. It’s not anything I’m ashamed of.”

When your oldest music includes hits such as My Immortal, a stunning power ballad whose bridge contains one of the most heart-wrenching chord progressions you’ll ever hear, it’s hard to see why there would be any need for shame at all. But though their enormous mainstream success in 2003 might seem like a fairytale, with Fallen selling more than 17million copies worldwide, what Amy remembers from that first album cycle is a whirlwind of uncertainty, about their music and about herself.

“It wasn’t all just roses,” she remembers, weighing her words. “I felt… insecure, trying to figure things out. Frustrated. I had to fight for everything I wanted and got treated like a child.”

She’s previously spoken to Hammer about the compromises she made while writing Fallen. On Bring Me To Life, “the suits” requested the band hire a rapper, Paul McCoy, for guest vocals.

“People who attach themselves to you are usually trying to take advantage – I felt that with the first half of my career, but I can identify it better now,” she explains. “Part of it is being a woman but part of it is just being young. You’re an artist; someone who wants to talk about feelings, not numbers.” (When Hammer asks her how she feels about having to be a businesswoman, she exclaims, “It sucks! I hate the business!”).

“What I’d go back and tell myself is that my gut instincts were right and I needed to be strong. I spent a lot of my emotional energy in the beginning feeling like I had to fight for my respect as a songwriter. All anybody saw me as was a girl in front of a band; a girl with some man behind her doing all the work. Now I only work with musicians that I respect and who respect me.”

Though by ‘some man’ she’s likely alluding to her ex-bandmate Ben Moody, with whom she acrimoniously parted ways after Fallen, there’s no bitterness in her voice. At 35, she’s grown into herself and is confident in her own abilities, and rightly so. Thankfully, the landscape is changing for female metal musicians. But back then, it seemed like female singers in metal – regardless of whether or not they were also the principal songwriters in their band, like Amy, or her contemporaries Cristina Scabbia (Lacuna Coil) and Sharon den Adel (Within Temptation) – only had two choices: to be one of the guys, or to be a tight-laced damsel floating around the stage.

Amy was both, and neither. For a generation of young girls, to see a woman on music television with porcelain skin and black hair, looking more like late-90s Frozen-era Madonna than Britney or Christina, was a breath of fresh air that influenced a whole subset of goth culture. She was not just a musician, but a style icon, presenting looks from the beatific, pallid sleepwalker of Bring Me to Life to the corseted black-and-red ensemble from Going Under.

“It’s funny when you think about it in terms of identity – Fallen is our most famous album, so the image that people have in their heads is of me at that time. I was in high school a couple of years before, and suddenly, boom!” she laughs. “That’s who you are for eternity for some people.”

It was also hard for her to avoid comparisons with Nightwish, Within Temptation and Lacuna Coil, all of whom also appeared in the late 90s. But far from being annoyed, Amy shows a lot of solidarity for her peers. “There are a lot of women kicking ass, and it makes me so happy,” she gushes. “Most of the stuff I listen to nowadays is sung by a lady, which is pretty awesome.”

Although successful in their own countries, none of those bands ever broke into the UK/US market in as big a way as Evanescence. We put it to her that, in contrast to the more conceptual lyrical themes of Nightwish et al, Evanescence’s songs are more grounded in reality.

“There’s something very honest in our music,” she concurs. “It’s more than storytelling; it’s a real diary entry. When I’m writing lyrics, I have to be brutally honest to the point where I’m like, ‘Oh great, now I have to sing this and explain it to my family!’” She lets out a wicked laugh, acknowledging the directness of songs like the scathing Call Me When You’re Sober, written about her previous relationship with Seether’s Shaun Morgan.

Her experience after Fallen had to have been the catalyst for a shift on their second album, The Open Door. With all the hype and fanfare gone, was this a truer, more honest record?

And from that moment on, everything that’s happened in their remarkable career has culminated in Synthesis, an orchestral and electronic reworking of Evanescence’s discography interspersed with instrumentals and two new tracks, bringing us back to the origins of their best-known songs by rebuilding them from the demo stage up.

“It’s a return to roots,” Amy says. “Arranging the songs like this takes them home for me, on an emotional level. I’d be lying if I said guitars weren’t a big part of the origins of Evanescence, but it’s also like – what if we went fully into that side of our music, just for a moment?”

In that sense, Synthesis is not necessarily the closing of one chapter of Evanescence’s career, nor is it an indicator of what’s to come. Amy agrees: “It’s a look at everything so far, but with a new perspective from the other side.”

Where that will lead them next is anybody’s guess, but as Amy hints that there will be a next record, it’s clear they’re far from done yet.