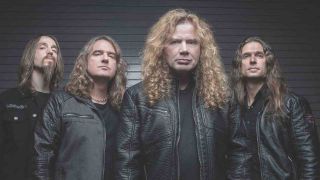 Dave Mustaine has given a further update on the new Megadeth album – and says it’s up there with the best the band have ever done.

The vocalist and guitarist was speaking with SiriusXM during the weekend’s four-hour live stream which featured sets from Megadeth, In Flames, Trivium and Lamb Of God.

Mustaine pointed to the length of the album after previously saying they were planning “12 or 13” tracks – and he reports that number has increased significantly.

Mustaine says: “We got in the studio and started working. It got to where we were writing all the original parts and we had 15 of them. We got to the end, and I said, ‘We didn't think about the cover songs!’ We had a couple of songs we wanted to do for this record, so we ended up doing 18 songs altogether.

“Then we had another song that we forgot was part of one of the other songs, so we had 19. We ditched one of the cover songs, so now we've got an 18-song album that we're going to be bringing."

Mustaine adds: “I think this is probably in the top four records as far as towards the tip of the spear with our career and everything that we're doing. It's up there with Countdown To Extinction, Rust In Peace and probably Peace Sells... But Who's Buying?. The other one I would say is Dystopia. So that would round up my top five.”

But he cautions: “Honestly, it's kind of lame when guys have new records and they go, 'Oh, this is my favourite one,' because we all do that. This is a good record, but I don't have any words to it yet, so…”

Earlier this month, bassist Ellefson said that while the album was still in its early stages, everyone within the Megadeth camp was “stoked” about it, adding: "They feel it is absolutely a perfect follow-up for Dystopia.”