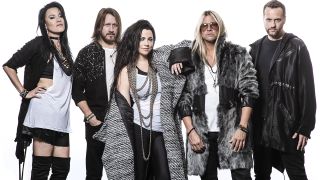 Evanescence have announced their new studio album The Bitter Truth will be released later this year.

A final date has still to be decided upon, but the band have also revealed the cover art and say their new single will launch later this week.

Evanescence say: “We promised you a new album in 2020 and we won’t let anything stop us. We are proud to begin sharing our new album The Bitter Truth with you, one piece at a time, starting with our first song Wasted On You on Friday!

“We will choose 50 people who pre-save the track to get the first listen of Wasted On You on a Zoom call with Amy Lee on Thursday (April 23).”

Back in January, Evanescence released a video for their cover of Fleetwood Mac classic The Chain. The track first came to light in 2019 in the trailer for smash hit Xbox One and PC video game Gears 5 – the latest instalment in the long-running Gears Of War franchise.

Vocalist Amy Lee said: “This cover was so fun to make. We love Fleetwood Mac and wanted to paint a dark and epic picture with our take on The Chain."

Earlier this month, Evanescence and Within Temptation announced the rescheduled dates on their European Worlds Collide tour. It had been due to start this month, but the run of 18 shows will now take place throughout September and into October.