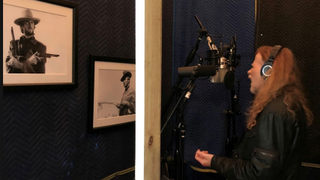 Megadeth frontman Dave Mustaine has been recording vocals for the band’s new album.

A Facebook post shows Mustaine in a vocal booth in his home studio, working on Megadeth‘s 16th studio album. It is accompanied by the caption: “Laying down some vocals today! #Megadeth16”

Mustaine has said the new material is “heavy as hell”, and that songs that may feature on the album include Rattlehead Part Two and The Dogs Of Chernobyl.

In a brand new interview with Metal Hammer, Mustaine talks exclusively about his throat cancer diagnosis back in June 2019 and his subsequent recovery.

Mustaine says: "They hit the cancer really hard, nine doses of chemo and 51 radiation treatments, which just beats the hell out of you. My mouth is still messed up but overall, I feel really good.”

Earlier this year, Mustaine reported he was cancer free, and in the interview, he describes the moment he was told the news.

He says: “I was here in Nashville at my doctor’s office. He had to reach down the back of my throat, which was really unpleasant, but it was important for him to feel and make sure.

“He said my progress was amazing, that both sides felt the same. I’ve got a metal plate in my neck that I figured might cause problems, but the doc told me, ‘Dave, you are in perfect health, 100%. You’re free to go.'”

Mustaine adds: “It sounds bizarre, but I kind of knew. I took good care of myself. I’d done everything my doctors told me to do. I had tons of support from family and friends. And I had lots of prayer.