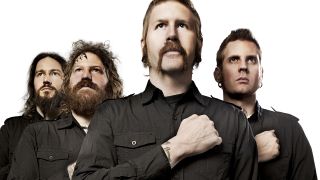 Mastodon are teasing a new track on their website titled Fallen Torches – with the full version set to be unveiled tomorrow (July 31).

The website encourages fans to “light the torch” by signing up to their newsletter – and once in, a snippet of the track can be heard, while the cover of a possible compilation album titled Medium Rarities is revealed. It’s set for launch on September 11, with further details to be revealed in due course.

As for the track, could this be the “brutal” song they teased back in January 2019 but was never released? At the time, Kerrang reported that the track was originally scheduled to launch ahead of their UK tour and features Scott Kelly of Neurosis.

Speaking with Rock Sverige in February 2019, drummer and vocalist Brann Dailor said: “We wanted to release it right ahead of this tour and we were trying really hard. We had one foot in the studio and one foot on the plane coming to Europe and it just didn’t really come together as quickly as we wanted it to.

“The song is fully finished and it’s mastered and ready to rock but we’ll just have to wait to release it. It would have made sense to release it ahead of this tour because we have Scott Kelly with us and he sings on some of it, so that would have been cool.

“We missed by a week or something and then we were stupid and went and blabbed about it like it was going to be a done deal.

“We thought it was going to be done sooner, but there were some circumstances that got in the way unfortunately, but it’s still a kickass song and it’s pretty heavy.”

As for Mastodon’s new and as-yet-untitled studio album, Dailor tells this month’s edition of Metal Hammer magazine that it contains “big heavy riffs” and “guitar gymnastics” by Brent Hinds.

He also chats about how he’s coped during lockdown by drawing 101 different pictures of clowns.

In issue 338, we find out how your favourite artists have been spending lockdown and ask them how they’re planning for the future. The magazine also features Machine Head, Code Orange, Lacuna Coil, Fever 333, Halestorm, The Hu, Testament, Five Finger Death Punch and much more.