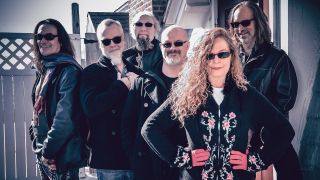 Circuline have released a live video of their track Summit exclusively with Prog.

The song features on the band’s most recent album Counterpoint, with the footage captured during their set at Trading Boundaries in June last year.

Circuline’s Andrew Colyer says: “Circuline loved performing at Trading Boundaries this past summer while on tour in England opening for IO Earth.

“Michael Clifford and his entire staff were so gracious and easy to work with and the food is fabulous. To top it off, to be performing at the Roger Dean gallery with Roger Dean himself in the audience was an honour and a thrill!

“Jerry Ewing and Prog magazine was absolutely correct in naming it one of the top 10 venues in the world. We loved our time in England, all the people were wonderful, and we can’t wait to play there again.”

As for the song, Colyer says: “Darin Brannon and I had a great time writing this song. His grooves for the first half made it easy to write the chord changes, and Darin’s concept for the second half of the song was a tribute to Pierre Moerlen’s Gong. We worked hard on the orchestration and arrangements for that.

“Randy McStine gave us great lyrics and melody lines. Natalie Brown, Billy Spillane, and I worked out all the harmony parts, and it was a total fluke how I wound up singing lead vocals.

“The rhythm on the chorus is a bit tricky, so when we were in the studio recording vocals, I stepped up to the mic to record a guide track for Billy to sing to. I wasn’t nervous, because no one would ever hear it, right? So I just belted it out. After that, Billy and Natalie insisted that I sing lead on that song.”

He adds: “Then I got really nervous, because those two are really the co-lead vocalists. But they’ve done a great job of encouraging and coaching me. Now I feel a bit like the George Harrison of the group – maybe I’ll get to sing lead on one song per album!”

Sound Of Contact and the Dave Kerzner Band guitarist Matt Dorsey guests on the track.

Circuline will release their new live CD/DVD/Blu-ray titled CircuLive:: Majestik later this year, with pre-order and final details to be revealed in due course.