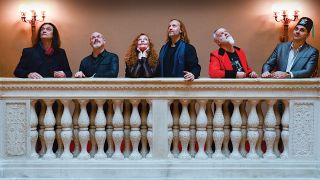 Musical advancement has always been one obvious motivator of progressive rock, and there’s almost an unspoken rule that if a band fails to develop, they’re likely to disenchant some listeners. Such upward momentum and ambition can have a heavy price though, and for Circuline, the divisions created during the writing sessions for their new album Counterpoint led to the departure of their founding guitarist Bill Shannon.

“We were in the studio writing and it just seemed to us that creatively we were moving in other directions,” recalls drummer Darin Brannon. “Billy is very heavily influenced in certain disciplines as far as the guitar is concerned. But Andy [Colyer, keyboard player/vocalist] and I really have a strong sense of where we want to go in terms of a musical direction. We want to keep our roots in the progressive rock genre, but we are also looking to maybe step outside into the general rock area as well. So a lot of the stuff we were working on with Bill was tending towards more heavily vocalised sections and I really don’t think that was something he wanted to do. So he stepped away, but we parted as friends.”

That decision to part gave the remaining members a sense of urgency to try to locate a replacement. With a performance at RoSfest booked for last May, and a desire to ensure they had two albums’ worth of material to perform, their initial attempts at recruitment proved somewhat futile. Indeed, after auditioning over 30 potential replacements, they were still no nearer to locating a guitarist they felt could enhance their music.

It was something that was clearly worrying Brannon and Colyer. Although they have their roots in the progressive rock tribute band Downing Grey, the thought of having to fill their set with cover versions – given they only had 45 minutes of original material for their allotted 90 minutes – was something they didn’t want to consider.

“It really isn’t a great showcase for your writing skills or the band if you have to do that,” says Brannon. “Admittedly, we did pepper some of the early Circuline shows with a few covers, but it wasn’t to the extent that Downing Grey was. Downing Grey was awesome and ridiculous at the same time. I mean, I’m a prog rock fan, but sitting in a room listening to a cover band play three hours of prog covers is a lot for anyone. It was a lot of work.”

But their album was developing apace, and with the core of the music already written by Brannon and Colyer, they decided to include several guest guitarists to perform on the album. It was only a temporary solution but one that gave them the flexibility to experiment, as Colyer explains.

“Darin and I would get together in the studio and we wrote the entire second album,” he says. “We called up a songwriter we’ve been working with, Randy McStine [of Lo Fi Resistance and The Fringe]. He helped us with the lyrics and vocal melodies, and then we called in all our guest guitarists. We tried to pick each song and think, ‘Who would sound good on this song?’ and we farmed out the songs to the people we thought would be a good match.”

The finished album is one that sounds far more polished than its predecessor. There are a raft on influences that have formed their core sound, ranging from King Crimson dissonance through to cinematic soundscapes, close vocal harmonies, metallic bombast and mellower passages that all avoid the predictable. The band deny any deliberate designing of that variety, instead claiming it was a natural process, one where every member of the band had to be entirely satisfied with the result.

“It’s not like we go into the studio planning things, and it’s really just our instinct,” says Brannon. “There are peaks and valleys in the songs but it’s not like we’re intentionally thinking, ‘Oh, we’ve just had a quiet part, now it needs to be loud.’ It just comes out that way and compared to our last album, it sounds more polished.

“I remember on that debut, we recorded the songs in one day. It was crazy. We all knew this and you just don’t go into a recording session thinking you’re going to record an entire album in a day. So we couldn’t be happier with the new record, even though it isn’t a conventional way to write and record – with two members writing all the music, then sending it out to guitarists. But they’re all gifted players so there wasn’t a lot of back and forth. It turned out really well.”

“One of the rules we have when writing is that we all have to be happy,” interjects Colyer. “When we listen back we all have to ask, ‘Did I get bored at any time during what I was hearing? Did that bit seem like it was going on a bit too long? Did my mind start to wander?’ And if any of us have those feelings then we have to change something in the arrangement.

“I like to have a variety in the music and don’t want to hear the same thing, or play the same thing live, as I would get bored. We’re just trying to write things that are interesting to us and where songs can have their own distinctive personality.

“It feels that we’ve really found our voice on this record. Even looking forward to the next record, we’ve now got a broad palate and that will be something to take forward. We can be more of a crossover act.”

Circuline finally located the guitarist they had been seeking in Beledo, who was their last auditionee, and with a solid performance at RoSfest now behind them, the band are planning to spend time touring the album throughout the US before heading to Europe in early 2017.