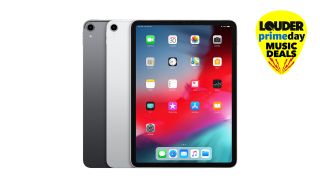 Amazon Prime Day is in full swing and we've already seen loads of fantastic deals for music fans doing the rounds. But Prime Day isn't all about headphones and booze, there's plenty of great tech deals to be had.

Today could be the best time to take the plunge on a new tablet, as Amazon has slashed prices on standard Apple iPad and iPad Pros with varying levels of storage.

The standard iPad features a crisp Retina screen which is great for watching TV and movies, streaming music and gaming. If you enjoy getting creative, the iPad Pro packs plenty of power for music making, drawing and more. Take a look at the best deals below.

Apple iPad Pro 11-inch, WiFi 1TB: £1,367 at Amazon
If you can do without cellular connectivity on your new iPad Pro, this could be the 1TB tablet deal that you pull the trigger on. We certainly wouldn't blame you.

Apple iPad Pro 11-inch, Wi-Fi + Cellular 512GB: £1,020
A 20% saving on this 512GB iPad Pro is sure to hit plenty of sweet spots, especially when it comes with the bonus of cellular connectivity.
View Deal

Apple iPad Pro 11-inch, Wi-Fi + Cellular 64GB: £811
The slightly miserly 64GB of storage might be a bit of a problem for you, but if you mainly stream content then this could be the best iPad deal for you.
View Deal

Apple iPad Pro 10.5-inch Wi-Fi + Cellular 64GB: $579
It may not be the current model, but the 2017 iPad Pro is still a great device for music-making, creating and gaming, and this discount definitely isn't to be sniffed at.View Deal

Apple iPad 128GB Wi-Fi. Was $429, now $299
SOLD OUT Enjoy a massive 30% saving on the 128GB version of the entry-level iPad - great if you need plenty of space for storing music, videos and photos.View Deal