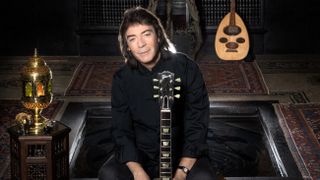 The former Genesis guitarist will issue the 11-track effort and follow-up to last year’s Wolflight on March 24, 2017, via InsideOut Music. The album is described by the label as “the warning of a siren sounding in this era of strife and division.”

Hackett says: “This latest waxing represents a bird’s eye view of the world of a musical migrant ignoring borders and celebrating our common ancestry with a unity of spirit, featuring musicians, singers and instruments from all over the world.

“From territorial frontiers to walled-up gateways, boundaries often hold back the tide. But while the night siren wails, music breaches all defences. To quote Plato, ‘When the music changes, the walls of the city shake.’”

The Night Siren features singers Kobi and Mira, from Israel and Palestine, and Nick D’Virgilio on drums. Other musicians on the record include Malik Mansurov from Azerbaijan, Gulli Breim from Iceland, as well as Roger King, Nad Sylvan, Gary O’Toole, Rob Townsend and Amanda Lehmann.

In April of next year, Hackett tours the UK on his Genesis Revisited tour. The dates will see him and his band perform tracks from Genesis album Wind And Wuthering, as well as material from The Night Siren and other Hackett classics.