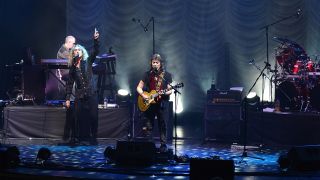 Steve Hackett has premiered his performance of Wolflight from upcoming release The Total Experience Live In Liverpool exclusively with Prog.

The 2CD, 2DVD and Blu-ray package was recorded during the guitarist’s Acolyte To Wolflight With Genesis Revisited tour last year and will be released on June 24 via Century Media/Inside Out.

He previously released a video featuring his performance of The Lamb Lies Down On Broadway from the DVD.

Hackett says of the show’s setlist: “It wasn’t an easy job to decide what to include, but I think there was a good balance between old and new.

“What I have always born in mind when choosing the songs is what they mean to the fans. Time has a way of turning them into an emotional calendar for people.

“These songs take on an importance and become part of their lives. So, when I do them live, authenticity is important. I am aware that what I have to do is find a connection between nostalgia and what things can sound like in a contemporary setting.”

Hackett plays at the TeamRock-sponsored Stone Free Festival in London on June 19.