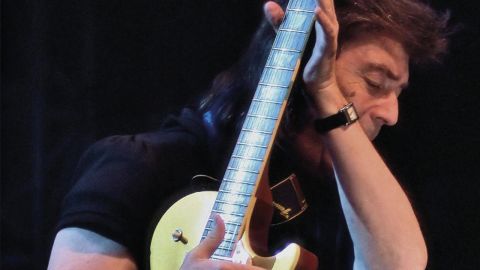 It’s probably true to say that over the past couple of years, Steve Hackett’s stock has never been higher.

With a fine and varied body of work, and something of a rebirth with the well-received albums Out Of The Tunnel’s Mouth and Beyond The Shrouded Horizon, Hackett’s Genesis Revisited project and its attendant lengthy touring saw him come to be regarded by many as the unofficial ‘curator’ of the Genesis legacy. In light of this, and his recent return to his own musical path with the excellent Wolflight, what better time to produce this lengthy trawl through his life and work, via a series of interviews with the man himself and his cohorts?

Lengthy is the operative word here, as director Matt Groom has produced a documentary lasting just under an eye-watering two and a half hours, yet the time seldom seems wasted, such is the detail explored and the entertainingly disarming way that our hero has of addressing the camera. Maybe he’s never been a charismatic storyteller, nor a mine of quotable one-liners, but Hackett does possess a wry, self-deprecating wit, and delivers his thoughts in a conversational, well-spoken manner that draws the viewer in.

An informative and revealing look behind the curtain.

There are other people featured here: his mother, his wife Jo, brother John, current band members and the seemingly inevitable, if slightly tangential, Steven Wilson. There’s also a poignant appearance from the late Chris Squire. And yet the vast majority of the story here is related by Hackett himself. Perhaps tellingly, if unsurprisingly, no ex-members of Genesis make an appearance at any stage. Interspersed among the chat are several sections wherein Hackett demonstrates – and occasionally demystifies – some of his trademark guitar techniques, both acoustically and electrically, which will surely have amateur axemen scurrying for their instruments.

The camerawork is of a consistently ‘home video’ feel, all shaky zooms and clumsy edits, but it may well be that this is a deliberate device to enhance the intimate and honest nature of the contents. Certainly, things do benefit from the lack of a glossy veneer, though it might have been good to include a little more music to illustrate the points being discussed here and there (an expensive business, music licensing), and more from the enormously entertaining Nick Beggs would have been very welcome.

Nit-picking aside, this is an extremely informative and revealing look behind the curtain at Hackett’s career, and one which will surely be welcomed by those who felt that he was scandalously overlooked in the recent Genesis documentary. All in all, then, this a most welcome addition to the Hackett canon.