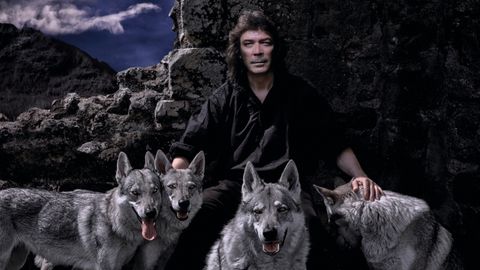 Boy, you’re gonna carry that weight, carry that weight a long time.’ So wrote The Beatles on one of the last songs they ever recorded together, acknowledging that whatever they did in the years that followed they would always have the tag ‘ex-Beatle’ next to their names.

There are worse fates of course, but you still have to feel a modicum of sympathy for the many musicians who have found a large body of solo work relatively disregarded by fans and critics who remain eternally fixated on the big name act of which they were once an integral part.

Steve Hackett bemoaned this syndrome recently in the wake of the BBC2 documentary Genesis – Together And Apart. He complained that long passages during which he talked about his solo career were left on the proverbial cutting room floor, and labelled it a ‘biased’ account. In many ways it’s odd that Hackett should have a problem with this, since of all the five members of Genesis’ classic line-up, he has been the one who has appeared happiest to curate the prestigious prog museum that is that golden period of their history spanning 1972-77. Two years ago, his second Genesis Revisited album offered re-recorded interpretations of the band’s songs from that period, and he’s planning to tour this new album in tandem with a new Genesis Revisited show later this year.

Maybe that’s the best way of reconciling his past with his present, because a modest but loyal fanbase have long understood that Hackett still has much to offer away from the Genesis mothership, and his first new solo album since 2011’s Beyond The Shrouded Horizon confirms that again.

‘No one can steal our freedom,’ he croons on the sumptuous title track. As ever, there’s a real sense that he’s got carte blanche to go wherever he pleases on this record, and that’s exactly what he does.

At heart, though, Hackett is an instrumentalist, and that much we can tell from the first track. Out Of The Body quickly paints a vivid picture long before the first syllable of vocals can be heard. A distant wolf’s howl is interrupted by a spatter of drums before a thundering snowplough of chugging power chords comes in. A following wind of sumptuous strings helps it gather pace before Hackett’s wailing, emotive guitar licks shorten into a staccato, galloping riff. The tempo slows to take in the scenery at the start of the title track, as if we’ve just reached the end of the opening sequence of a movie, and that leads into a beautifully folk-tinged hymn of optimism and defiance.

More impressive still is Love Song To A Vampire, an unashamedly romantic paean to a faithless and possibly abusive lover who “enslaved” him. Its bitter-sweet subject matter only serves to deepen the soul-stroking sweep of its melody.

But after that the plot thickens, maybe too much for its own good. There are several intriguing passages in The Wheel’s Turning, book-ended by obtuse snippets of Third Man-style circus music and crackly snatches of German, but it never quite knits together as a whole. You wonder if he’s papering over the cracks between a cut-and-shut medley of ideas-in-progress. Corycian Fire’s Eastern, Kashmir-style textures and operatic melodrama is a bit more engaging, and Earthshine’s classical guitar passage has a gentle charm, but it still seems like a detour from the main musical journey.

Beguiling synthesised guitar patterns skate gracefully over the plains on Dust And Dreams, with snarling distortion snapping at their heels, before we reach the final track. Heart Song’s redemptive, homecoming feel once again leads us back to the optimistic message that threads through the whole piece. ‘Love will find a way,’ our hero concludes, offering an optimistic reflection on the whole, head-spinning ride: ‘Legions with their chariots, tried to pin us down/Tried to build their walls around us, tried to nail us down.’ All of which could just about be taken as a metaphor for his own solo career. But on Wolflight he emphatically establishes one thing yet again: Steve Hackett may be ex-Genesis, but he’s also very much his own man.