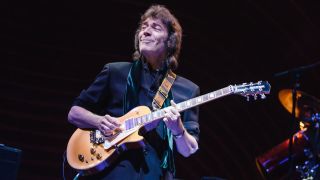 Steve Hackett is not a guitarist who’s prepared to fit his love of music into firm categories.

“I suppose with my background, people might expect me to choose progressive rock albums here. And I just haven’t chosen any strictly prog records. But these are the albums which fired my imagination back when I was younger.”

For Hackett, all of these choices have something in common.

“The guitar playing is very exciting, and in terms of technique and punctuation, every one of them was progressive in their own right. I used to listen to albums just waiting for the moment when the explosive guitar solo would come in, and usually they did. But what all of the musicians here were doing was more than just firing up solos for the sake of it. They were offering hybrids of styles that took music forward. Some of my selections are probably obvious ones, but I’d hope there might be one or two here that people haven’t heard before, and could be tempted to check out. All five, though, mean something special to me.”

Steve has announced a series of 2017 dates where he’ll be playing tracks from Genesis’s Wind And Wuthering.

“What’s interesting about this album is that it presents the music of American jazz pianist Bill Evans, which was originally done of course on the piano. For McLaughlin, what comes through is that it’s a genuine labour of love. It’s full of passion.

“The Los Angeles Guitar Quartet, with whom he was playing at the time, obviously laid down the template, and then he improvised over this. His performance is very heartfelt. There’s no hint of bombast here, nor of reliance on volume. So, that makes it different to what he was doing with the Mahavishnu Orchestra. I enjoy the fact that McLaughlin is outside of his comfort zone, and makes it all work so brilliantly. This is a fine wine album.”

“For me, it changed the ethos of what a guitar can do. What I mean by that is Beck had the idea that a guitarist can do something out of character, and do it so passionately well. George Martin did a great job on production, but then we are talking about the man who was the fifth and sixth Beatle, so no surprise there. I like the unusual time signatures Beck used. And it is a little more jazzy than people might have expected at the time from him. Like McLaughlin on Time Remembered…, he was outside of his comfort zone, and for me that’s enormously attractive.

“Beck is driven by tone, and there’s a marvellous moment on Cause We’ve Ended As Lovers when he makes the guitar sound like a saxophone. It’s great when you can get the guitar to imitate another instrument. Somehow it’s so fulfilling. You can also hear the hiss from his amp in the studio coming through on this record, which is so authentic. And the sheer combination of Beck and Martin is magnificent. I also considered another Beck album for this list, Roger The Engineer by The Yardbirds. There’s some great playing on that as well.”

“I recall very well when I first heard this album. I was doing a signing session at a record store in Birmingham. And before this began, the shop was playing Offramp. It sounded very interesting. Metheny was using a guitar synthesiser on the album – a Roland. Now, at the time I was also experimenting with this instrument, and I was fascinated by the way he was using it. The music sounded very melodic, and I loved the aspect of imitation, the way he made this sound like a cross between two instruments.

“I’ve often put this on when I have people round. Because it works on two levels. If people wanted, they could listen to what was being played. But it was also really good as background music. I don’t mean that at all dismissively. The album has that dual impact. It’s has a variation in styles and Offramp is an album I am very fond of. There’s a sense of atmospherics here. Metheny wasn’t trying to blow people off the planet. I like that side of his approach.”

“By the time I heard this album I was already a classical music fan. But what Segovia did with Bach was stirring to my young ears. And I still love what he did. I was 15 years old at the time I encountered the album, and it was a revelation in my little world. I never realised you could work such miracles on a guitar with nylon strings… well, actually at the time it would have been gut strings. I wonder how many cats were sacrificed to get these strings.

“I have since recorded some of these Bach pieces myself. What Segovia did was inspire me by showing how music seemingly more suited to the keyboard can work so well on the guitar. At the time, I don’t think people regarded the guitar as a serious instrument. And Segovia had to put up with a lot of flak when he began. On this album, though, his playing is compelling.”

“Whenever I talk to guitarists with whom I’ve worked and ask them what their favourite albums are, this one is always mentioned. In fact, it comes out on top. I can’t tell you the number of copies of this I’ve bought. I just seem to lose them. When I recently moved home, I found one again, after thinking I’d have to invest in yet another copy! I’ve also bought the album for other people as well.

“The guitar’s the star here. People often say that it was the album which invented the whole idea of the Guitar Hero, and it’s hard to argue against it. Eric had his amp turned up to 11, and he was screaming and blazing away. I recall talking to Gus Dudgeon, who engineered the album, and telling him I loved the way it had been mixed, with the guitar so upfront. And he said, ‘What mix? The guitar was that loud!’. At the time Eric Clapton was definitely the team leader for guitarists. I’m sure he recorded most of this album in one take; it’s certainly vibrant and live enough. And what he did here has never been equalled.

“What I also love about this album is the way it reminds me of the mid-60s, when I first started going to out to dives. You can almost smell the smoke in the grooves! Eric also did a fine job with the vocals on Ramblin’ On My Mind. I know he never liked what he did, but I feel it comes over very well.”