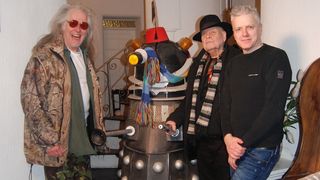 Rob Reed has released a video for his take on the classic theme tune from long-running BBC sci-fi series Doctor Who exclusively with Prog.

He launched a teaser for the track last month, with the Magenta leader recording the track with Mike Oldfield producer and Sanctuary collaborator Tom Newman and folk musician Les Penning, who also appear in the promo.

Reed says: “We had a great time making the video. It’s quite an adventure, with Les Penning cast as the Doctor and Tom Newman as the Evil Dunnit.

“The single contains eight tracks in all. We have two mixes of the theme from Doctor Who and Tom Newman’s Happy Mix – which provides a great contrast to my own BBC Mix.

“We also have two tracks from myself, Tom and Les, which really show off how diverse our musical styles are.”

Reed adds: “Fans of my Sanctuary albums may be interested to know that the CD includes an exclusive ChimpanA mix of a selection from the forthcoming Sanctuary III album.

Doctor Who is available for pre-order from Reed’s official website and Burning Shed.

Magenta's Rob Reed: "I had dig deep to find something new to say"