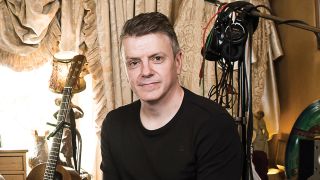 I’ve always lived in the Rhondda Valleys, right up in the buttocks of South Wales.

I was six and I just loved Life On Mars by David Bowie. I loved the piano playing on it, and of course I didn’t realise it was Rick Wakeman. That was the song that got me into playing piano.

Well, when I was 10 I was bought Tubular Bells for Christmas. That and The Sound Of Music. Both great albums in their own way!

Mike Oldfield at Sophia Gardens in Cardiff, 1980. It was my very first gig. Eight of us caught the bus down, ran to the front to see Mike and his 11-piece band. It was stunning.

Currently my favourite thing in the studio is a software version of the Fairlight [game-changing 1980s sampler]. It’s got all the Trevor Horn sounds on there. I can’t stop playing with it.

I love ABBA. I was listening to their album The Visitors the other day. Brilliant songwriters, and their production was incredible.

Hammer horror films. I’m obsessed with them. My brother and I would do quizzes on them as kids. My favourite has to be The Devil Rides Out.

I spent 500 quid on a VIP ticket for Kate Bush’s Before The Dawn show at Hammersmith. The VIP bit wasn’t great, but the show was worth every penny.

I’ve always loved playing The Borderline – the sound’s stunning, the stage, the atmosphere, the London crowd. But to see a band, give me St David’s Hall in Cardiff any day. Great sound, comfy seats, and ice cream at half time.

What do you collect?

The last prog album you bought?

At the moment I’m obsessed with The Blue Nile. I’ve just bought all their back catalogue and am playing it to death. Every song on Hats is a tearjerker. Paul Buchanan’s voice blows me away.

Steve Hackett at St David’s Hall. It was an amazing show. Obviously his guitar playing was incredible, but I thought his singing was particularly good.

No. Every female I’ve ever known has hated prog. I only ever met one who liked Tubular Bells, and I ended up marrying her!

Mike Oldfield’s in my soul, but it’s got to be Trevor Horn. As a producer he’s influenced all my work. I love the sound of his records – I don’t think he’s made a bad one.

Who do you call in the prog community for a good night out.

[Magenta guitarist] Chris Fry. But we’re the most un-rock’n’roll band in the world, so we’d go and have a sit down in a tea shop and have tea in china cups with some Danish pastries. We’re the Hinge & Bracket of prog.

Machine Messiah, the first track from Yes’ Drama. I know a lot of Yes fans hate it but I think it’s their best album. Trevor Horn sang on it. It’s just classic prog – I’ve spent my whole prog career trying to get close to that album.

Who’s the prog muso you’d most like to work with?

I’m desperate to work with Steve Hogarth, by far the best male singer in prog today. I can hear it all in my head – his voice in a cinematic, Celtic setting. It would be amazing.

What’s the prog album that gets you in a good mood?

I’m not a huge Rush fan but I love Power Windows. It’s a bit more keyboard-y, a really uplifting album that always perks me up.

Despite the money, that Kate Bush gig. It was almost a religious experience. I never cry at gigs but I was inconsolable that night. It was perfect.

Bill Bruford’s autobiography. It’s a brilliant, brutally honest analysis of the music business – dealing with people, with egos, making and losing money, the insecurities. Every musician should read it.

Tubular Bells. It means so much to me. It’s iconic in every way – it’s just perfection.

Magenta’s We Are Legend is out now, so I’m coming back fresh to Sanctuary, working on Sanctuary III. Steve Balsamo and I have just finished a new Chimpan A album that’s been 10 years in the making, and I’m looking for another Kompendium-style project now. I need to find something big to get stuck into…

How U2’s The Joshua Tree changed my life, by Magenta’s Rob Reed