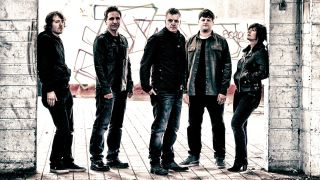 Magenta: back in business!

“ You can sometimes wake up in the morning and think, ‘I can’t be arsed,’” declares Magenta’s Rob Reed with an unexpected and startling honesty. “I was suffering from writer’s block. I reached a point where I thought, ‘I’ll just make a record for myself and won’t care if people hate it.’”

Such creative toils are commonplace with many musicians, but with Magenta last releasing an album four years ago (2013’s The Twenty Seven Club), there could be a perception that Reed would have stored away countless musical ideas, ready to return when the timing was right. But as he explains, aside from that persistent and debilitating writer’s block, he was determined to ensure that he had something fresh to release, rather than repeat the past.

“It was really hard for me,” he says. “I write and produce the music and I had to dig deep to find the enthusiasm again, something new to say. That was a real battle I’ve fought for the last two years. In the meantime, I’ve gone off and done a couple of solo records, like the Sanctuary project. One of the biggest things is that when a band have been going for a few years, you reach a point when people have their own ideas of what the band is all about. On the last album, we gave it our all and it was one of the best Magenta albums. It came out and sold to all the regular Magenta fans, but we seem to get tarred with this brush of other people thinking they know what it’s all about, but not having really listened to us. So I was a bit despondent with the whole Magenta thing and it’s hard for us to shake that off and say, ‘Hold on. Listen to what we’re doing now.’”

“He comes out with all these funny Rob-isms and just said that his ‘prog larder was empty’,” adds singer Christina Booth. “I think whenever you do something creative, whether that’s writing a book, painting or being a singer-songwriter, you do get those moments when you’re in a wilderness and you’re not sure where to go. Rob does try to come up with something a bit different. I know he’s received criticism over the years from going back to his 70s influences a bit too much, but he writes like that because he’s passionate about the music from that time. I feel that this album moves us forward again.”

Dwarfing such issues as Reed struggling for direction, the band’s momentum was temporarily restricted after the release of their last album when Booth was diagnosed with breast cancer. Thankfully she has recovered, even if her stamina isn’t back to its usual level.

“I’m fine, and touch wood I am cancer-free,” she says cheerily. “You think that after you’ve had the operation, the chemotherapy and get the all-clear and that your life is going to go back to normal, but it doesn’t. You’re changed as a person physically and mentally and at the moment, I’m struggling with my medication, as the side effects can be debilitating.”

“It was very traumatic and she was disappointed that everything had to stop, but compared to music, that was a lot more serious,” says Reed. “So we were there for her and everything rightfully had to wait. Thankfully it went well for her, and that took about two years. We then tried a couple of gigs and slowly tried to get everything back into place. We didn’t have any new material to play, so it was just our greatest hits set. The reaction was really good and we do have a loyal fanbase we have built up over the last 12 years. But I think we desperately needed a new album and something to come back with.”

That new album is somewhat bravely titled We Are Legend, which if taken literally could result in heated online debates as to the legitimacy of that claim. Reed forcefully denies that he’s declaring that Magenta are a legendary act, and instead explains that merely links in to the lyrics on one of the tracks. He is painfully aware, though, that he is potentially opening the band up to a few cynical comments.

“I know that we are going to get slated if people take that literally, but who cares,” he says forcefully. “I’m a huge sci-fi horror film buff and there is a film called The Omega Man, which is about the last man on Earth, and it was remade with Will Smith as I Am Legend [the name of the original Richard Matheson novel]. The third track is called Legend and is all about the film and the story is all about the mutants who can only come out at night. The title isn’t meant to be, ‘Magenta are the best band in the world’ and all that shit, but it could be construed along the lines of being the last prog band standing. The artwork feeds into that, as it’s all based on that last survivor vibe, with a desolate landscape complete with three cartoon characters, who may look like us. We want to get people’s attention.”

Certainly, the new album is another musical progression from a band who do frequently change their approach to avoid being predictable. Yet there was still a feeling that Magenta needed to completely freshen their sound, not necessarily out of an attempt to appeal to the mass market, but to steer around Reed’s disillusionment and fear of becoming musically boring. He was also genuinely fearful that the band might have ended if that sensation hadn’t been overcome.

“I had to find something musical to say and I don’t think I would have made another Magenta record if I hadn’t got over that,” he says candidly. “The problem was that I was constraining myself. That wasn’t so much what people might want, but more that people wouldn’t like it if I did certain things. Before we were in Magenta, Tina and I were in a pop band called Trippa. The music was interesting and not a million miles away from prog. It was more electronic and I thought I wouldn’t mind bringing a bit of that back. I mean, it’s not like it sounds like the Sex Pistols or anything, so I haven’t gone bonkers. On the Magenta albums, my sound palette has always been the classic Hammond, Mellotron, Moog and 12-string guitars. I had avoided anything modern or electronic and decided to bring a bit of that into it. There are so many bands that influenced me, like Depeche Mode, U2 and Björk, and that was a catalyst to get my interest and enthusiasm back into it.”

Altering your sound is something fraught with pitfalls, not least the fact that if you veer into areas of music that are incongruous, there’s the chance that you’ll alienate your fanbase and not garner any new listeners. Booth believes that the changes aren’t likely to frighten their fans, and accepts that no matter what Magenta do, there’ll always be criticism.

“I can hear little bits and references to some of the other albums that we’ve done, but it’s moving slightly in another direction,” she says. “I know that when we’ve been finishing an album, Rob puts himself through real pain, as everyone does, where you have your doubts, but trying to please everyone is impossible. You’re going to get criticised if you stay the same or if you change too much. As you get older, you start thinking that you know what you want, that you’re going to do it, and if people don’t like it then basically they can go fuck themselves. I think that’s the way Rob is feeling, too. Unfortunately for Magenta, we don’t gig enough. It’s something I’ve always found frustrating, as that is how you get more people to hear your music. Which is why festivals are great if you can get on the bill. Obviously I am going to say it, but I do think Magenta deserve to have a bigger audience.”

Another way for acts to achieve that larger audience Booth alludes to is to fully immerse themselves in the self-promoting marketing circus. Reed, however, dismisses the notion of pursuing such a strategy for Magenta.

“I do love making music but I hate all the other stuff,” he laughs. “I find it really hard to do the false handshakes to climb up the ladder. Everything we’ve achieved is due to the music and not down to who our drinking partners are or who our buddies are. It’s down to the music. I do wish that we had a manager with a big fat cigar, who could go out and bullshit people like everyone else does…”

We Are Legend is out April 10 on Tigermoth Records. See www.magenta-web.com for more information.

Where did it all go wrong with Reed and Booth’s 90s pop project?

Back in the late 90s, Reed and Booth pursued a pop career as part of Trippa. Appearances on breakfast TV and Radio 1 seemed to have positioned the band on the cusp of a major breakthrough, but it never came. Indeed, as Reed himself puts it, “I could write a book on the ups and downs of that and call it How Not To Be Famous or How Not To Get A Proper Record Deal.”

Songs such as Where Are You and Falling undoubtedly had an appealing sound, and it remains surprising that major labels weren’t battling for them. Christina Booth explains what went wrong.

“We tried to get a record deal and we were really chasing that at the time. We went through a period when we thought that we were going to get signed and there was a deal on the table. We did The Big Breakfast and Jo Whiley had us as Single Of The Week on Radio 1, and we were one of the first unsigned bands to do that. And then I don’t know what happened. In my opinion, we did have a manager who was a bit of a knobhead, but I can’t put all the blame on him. I don’t know if he had unrealistic expectations of what he was trying to push for the deal. It all seemed to be building and then suddenly fell flat. Rob and I had exhausted ourselves; you do end up prostituting yourself to the A&R people. If you’re chasing a deal, you go to meetings and they ask you to change things around. In the end you feel like saying ‘forget it’ and that is kind of what happened. They were exciting times, and looking back, you ask yourself, ‘What is success and what is failure?’ We failed to make it as a pop band and get that record deal, but doing what we have with Magenta for the last few years, I wouldn’t say that I’ve failed in my music career. Rob said a few weeks ago that it would be nice to do a Trippa gig, redo some of the songs any maybe even play live supporting Magenta. So maybe that is something that we’ll do.”

How U2’s The Joshua Tree changed my life, by Magenta’s Rob Reed