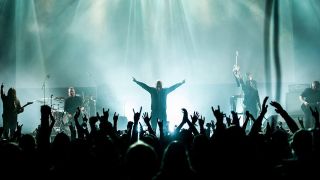 Kristiansand, Norway’s revered prog metal masters Green Carnation will be heading into the studio this September to record the band’s first new album for 14 years, and due in 2020, Metal Hammer can exclusively reveal.

Describe by the band as “a tribute to Green Carnation’s past, present and future”, the forthcoming opus will consist of three brand new songs, one remake of a song from their debut album and one cover song. The sessions, taking place in their hometown’s DUB Studios, also mark a reunion with Endre Kirkesola (Abbath, In Vain, Solefald), the producer of the band’s legendary 2001 album, Light Of Day, Day Of Darkness.

Vocalist Kjetil Nordhus says: “We are very happy to be able to announce this now. The band has made some big plans, yet to be revealed, and this release is the first part of that. First we thought we were going to record an EP, but we have been creative mood, so it is going to be a proper full-length album, with almost 50 minutes of music, and five songs.”

Green Carnation founding member, guitarist and former Emperor bassist Tchort says: “Endre knows the band better than anyone. He was also playing keys with us in our Light Of Day, Day Of Darkness comeback tour in 2016, so we have every reason to believe that this will be a great match, both for ourselves, and for the listeners.”

The band is discussing with labels, managements and booking agents for future cooperation, so watch this space for further details!