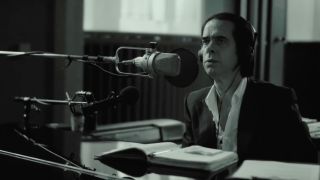 Nick Cave & The Bad Seeds have released a video for their track Jesus Alone.

The song will feature on their upcoming 16th album Skeleton Tree, which is out on September 9 via their Bad Seeds Ltd label.

The promo features footage from the film One More Time With Feeling, which was overseen by director Andrew Dominik.

The project has evolved from a performance-based concept into a movie partly inspired by the death of Cave’s teenage son Arthur after he fell from a cliff last year. It includes interviews and footage which “delve into the tragic backdrop of the writing and recording of the album.”

A trailer was released last month, with Cave saying: “Most of us don’t want to change, really, I mean why should we? What we do want is sort of modifications on the original model.

“But what happens when an event occurs that is so catastrophic, that we just change. We change from the known person to an unknown person, so that when you look at yourself in the mirror – do you recognise the person that you were? That the person inside the skin is a different person?”

It’ll be released in cinemas the day before the album comes out, with tickets available directly via the movie’s website.

Skeleton Tree is available for pre-order, with those purchasing ahead of its official release getting instant access to Jesus Alone.