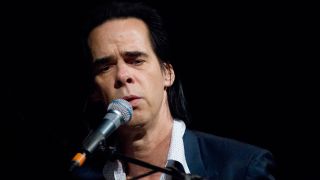 Nick Cave will launch the movie One More Time With Feeling on September 8.

The one-night-only film premiere will accompany the release of the Aussie singer’s upcoming 16th album Skeleton Tree – giving fans the first chance to hear the record before it hits shelves the following day. A trailer for One More Time With Feeling can be viewed below.

Overseen by director Andrew Dominik, the project has grown from a performance-based concept into a movie partly inspired by the death of Cave’s teenage son Arthur after he fell from a cliff last year. It includes interviews and footage which “delve into the tragic backdrop of the writing and recording of the album.

“The result is fragile, raw and a true testament to an artist trying to find his way through the darkness.”

One More Time With Feeling has also been filmed in black-and-white, colour and in 3D.

Cave says in the trailer: “Most of us don’t want to change, really, I mean why should we? What we do want is sort of modifications on the original model.

“But what happens when an event occurs that is so catastrophic, that we just change. We change from the known person to an unknown person, so that when you look at yourself in the mirror – do you recognise the person that you were? That the person inside the skin is a different person?”

Tickets are available on the film’s website. Skeleton Tree can also be pre-ordered on Cave’s website. Further album details will be revealed in due course.

Why I Love Nick Cave and The Bad Seeds – by Burton C. Bell